The legacy of Jadotville for Irish veterans: Suicide, alcoholism and PTSD

At least six Irish soldiers took their own lives as a result of the 1961 siege, survivors say 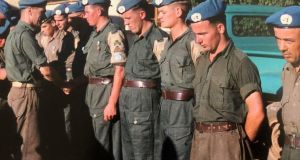 In the summer of 1992 Bernadette Quinlan arrived home on holidays from Switzerland, where she and her husband Gerry were living at the time. The phone rang in the downstairs hallway of the family home in Carrick-on-Shannon, Co Leitrim.

It was a long-distance call from Helen, the partner of her brother Matt, and it was bad news. Matt, the eldest of the Quinlan children, had shot himself in the Australian outback town of Winton, Queensland. He was 47.

As she slowly contemplated the news, she could see her parents through the glass window in the kitchen. How could she tell them that a third son had died? Her brother Edmond had tragically drowned in the river Shannon in 1974, aged 28. Another brother, Liam, died aged 34 after a short illness.

Matt had followed his father into the Irish Army. “Daddy was always very strong. You could see him trying to choke back the tears, and the devastation on his face. I’ll never forget that because it’s the first time I saw him breaking down,” Bernadette recalls.

The Quinlans were a military family. The father, Ned, came from Tipperary. He rose to the rank of company quartermaster sergeant and did a tour of duty with the UN in the Congo in 1963. His wife, Alice, was from Navan, Co Meath. There were nine children. Pat, the third-oldest boy, also joined the army.

Matt was born in 1944. He joined the army at the first opportunity when he was 16. His was the Irish-language 1st battalion, based at Renmore Barracks in Galway.

A colour photograph in the family collection shows a lean young man, his chest out. He was only in the army a year when Jadotville occurred.

The Congo was catapulted into the Irish conscience throughout the early years of the 1960s. More than 5,000 Irish soldiers served in the country, and 26 never came back, including nine who were killed during the Niemba ambush on November 8th, 1960, by Baluba tribesmen the Irish were sent to protect.

A company from 35th Battalion went to the Congo in June 1961. The Irish were sent to Jadotville, a mining town 90km north of the provincial capital, Elizabethville, in early September 1961, ostensibly to protect the white, mostly Belgian, population. But when they got there they realised they were not wanted. Many white residents had a vested interest in the breakaway province.

Sensing the danger, A Company’s commander, Comdt Pat Quinlan (no relation), made the Irish contingent dig trenches in the sweltering African heat and wait.

Two days before the siege began, Matt wrote home in ominous terms to his mother.

“I could not write yesterday as I was dug in in a trench with a mortar all day. We are now surrounded by Tshombe’s troops (the Gendarmerie).”

When UN troops broke their peacekeeping mandate and attacked Katanga installations in Elizabethville on the morning of September 13th, 1961, during Operation Morthor, the Irish, isolated and exposed, were regarded as a legitimate target and were attacked four hours later in reprisal.

The shelling began early on the morning of September 13th, 1961, and the Irish were quick to their stations. Matt was dispatched to a mortar trench along with three other men, though the term “men” is stretching it, as the other three were 16, 17 and 18 respectively. These teenagers paid no small part in the ensuing battle between the Irish on one side and a Katanganese militia of separatist troops, tribesmen and white mercenaries who outnumbered them 20 to one.

Having figured out the co-ordinates himself, Matt took out a concealed French 75mm howitzer, which could have reduced the UN compound to rubble had it been allowed to operate. He was nominated for a Distinguished Service Medal for his efforts.

Attempts by UN reinforcements to relieve the company were met by heavy resistance at the Lufira Bridge, 27km away and the only bridge crossing between Elizabethville and Jadotville.

After five days the enemy requested a ceasefire, which was put into effect and this was the end of the battle. However, due to a lack of support from UN higher authority this ceasefire in effect became a surrender. A Company at this stage were out of ammunition, food and water and surrounded by an overwhelming force.

Matt marked his 17th birthday as a prisoner of war. After six weeks the men were freed.

Most of A Company returned home by Christmas 1961. The initial reaction at home was one of relief – there had been reports that dozens of Irish were killed during the siege. Matt came back to Carrick-on-Shannon a hero. There was a bonfire and neighbours hosted a party in his honour.

The problem, though, was that A Company and Comdt Quinlan had been too successful. They had managed to hold out for five days against an overwhelming force without suffering a single fatality, while inflicting huge casualties on the enemy, some 300 dead and 750 wounded, according to some eyewitness reports.

In UN and Irish government circles, however, all that mattered was that the men had surrendered, not that they had shown such resourcefulness and bravery against a numerically superior enemy.

The dreaded sobriquet “Jadotville Jack” came to be attached to the men of A Company.

The aftermath of Jadotville clearly had a profound impact on Matt Quinlan. His family assumed he would become a career soldier like his father. Instead he became more withdrawn and in 1964 at just the age of 20 he left the Army.

As well as being recommended for a Distinguished Service Medal for his conduct at Jadotville, he was recommended by his platoon commander, Capt Liam Donnelly, for promotion to corporal.

His sister Bernadette believes that if he had known about both of these actions and if the Jadotville veterans had been treated fairly, he would have remained in the Army and his life would have been different.

“If he had known, we believe he would have looked at the Jadotville experience in a different light and continued his career in the Army. I feel that the Congo and its aftermath tortured and then took Matt’s life.”

In 1964 Matt attended his youngest sister Alice’s christening in St Mary’s Church in Carrick-on-Shannon. It was the last time his family would see him alive.

He emigrated first to England to stay with his father’s family and then to Australia. Like a lot of emigrants, he was always coming home, but he never did. The tone of his letters home started off hopefully, but gradually became non-committal.

“He kept all Mammy’s letters,” says Bernadette. “The letters we got when he first went to Australia were full of stories and tales of Australia. My mother’s letters to him were initially full of joy that she would see him. ‘You’ll probably come home for Christmas this year, Matt.’

“Over the years that changed to, ‘Matt, your father and I would like to see you’ and then in one of her last letters she wrote to him ‘One day we will meet in heaven’. She realised with heartbreaking resignation and acceptance even before he died that she would never see him again.”

Matt’s siblings, Alice, Brenda and Gerald, flew to Australia to bury their brother. The local Aboriginal people had wrapped his body in a blanket in accordance with their faith to speed him to the other side.

Bernadette remembers: “Back in Ireland, I stood with my parents in the same church where I’d last seen Matt, and we had a funeral Mass for him, but there was no coffin, no body and no burial. My heart broke for my parents.”

Matt was not the only Jadotville veteran to take his own life. Pte John Manning from Mohill, Co Leitrim, was just 18 at Jadotville. He was shot in the shoulder during the siege. He took his own life in England in 1963 aged 20.

One Jadotville veteran, who declined to be named, says he lists six men who took their lives as a consequence of Jadotville “and that doesn’t include the ones who drank themselves to death, which is slow suicide to me”.

There were many others who did not take their own lives but suffered as a consequence of the siege. In 2017 the Balbriggan and District Historical Society unveiled a plaque to local man Terence McMahon, who shared the same mortar trench as Matt Quinlan during the battle.

He too left the Army after his tour of duty finished. He emigrated to the United States, where he got a job in the New York City Police.

“He was like Pearse Brosnan, an incredibly handsome young man,” Leo Quinlan heard from friends and family. “He was a very unhappy man all his life. The police got worried about him. For the last five years of his career, they took his gun away from him and put him in a desk job.

“He came back to Balbriggan and wandered around. He had a bit of money saved. He became a kind of oddity in the town, a gentle soul with a big white beard flowing around the place, a character until he passed away at the age of 52. He was one of the unhappy results of Jadotville and post-traumatic stress.”

Michael Tighe, another Jadotville veteran, remembers the fate of Anthony McInerney, a friend of his from Longford town who spent most of his life after the siege in St Loman’s psychiatric hospital and was one of three veterans who died there.

“He was an all-army marksman. His equilibrium was upset. I have no doubt it was entirely down to Jadotville.”

Tighe lives in Longford town and is a spry 80-year-old. He has written an engaging, self-published book, The Tiger of Jadotville. He is another who has suffered the effects of Jadotville.

“There’s not a day that I don’t think of Jadotville in some form or another. It’s not a month ago that I woke up and I was jumping out of bed. My wife tore my vest pulling me back and that’s after 58 years.”

The concept of post-traumatic stress disorder was only recognised in 1980. Prior to that it had been known as shell-shock, but was regarded as essentially untreatable save for incarceration in a mental institution.

In November, after an extensive search, documents were found in the Army records that showed Comdt Quinlan had recommended 33 men who had served with A Company for medals for gallantry, five of whom were also recommended for the Military Medal for Gallantry, the Irish equivalent of the Victoria Cross.

Eight of the 33 are still alive, including Mr Tighe, who was recommended for the Distinguished Service Medal.

Bernadette Quinlan would like to see her brother being posthumously awarded the Distinguished Service Medal he was nominated for, but the Quinlan family would settle for Comdt Pat Quinlan being awarded for his leadership at Jadotville.

“He is, in our family’s eyes, a national hero,” she said. “He brought back all his men alive. If he was awarded a medal, it would be recognition for all of those at Jadotville.”

1 Coronavirus: Almost 60 new cases recorded in Italy as two die
2 Archbishop: Sex abuse of women by L’Arche founder ‘reprehensible’
3 Ryanair’s Michael O’Leary under fire for comments on Muslim men
4 Blue Brexit passports made by European firm to be issued from next month
5 The view from Clondalkin: If Sinn Féin don’t get in, ‘there will be marches’
Real news has value SUBSCRIBE