The job nobody wants: secretary-general of the Department of Justice

Salary of around €200,000 is unlikely to attract an external candidate 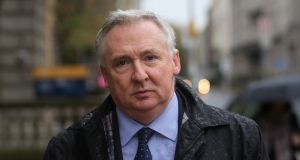 In ordinary times, the job of secretary-general of one of the largest and most powerful departments in the State should be one of the most attractive jobs in the country.

Yet the Department of Justice now has to find another chief, and quicker than had been anticipated. Noel Waters, the former secretary-general, had announced earlier this month that he intended to retire next February but stood down this week as the latest political crisis caused by justice issues reached its peak.

Justice is seen as one of the big beast departments, alongside the Departments of the Taoiseach, Finance, Public Expenditure, and Foreign Affairs, and should be one of the most attractive.

Yet the process that led to Mr Waters’s eventual appointment took two years, and some who were informally approached turned down the opportunity to interview for the job.

“We couldn’t get anyone to apply for it,” said one figure involved in the process.

Mr Waters took on the position on an acting basis from October 2014, following the departure of his predecessor Brian Purcell to a position in the HSE after previous justice controversies.

He took on the position on a full time basis in October 2016, and secretaries general usually remain in place for seven year terms.

But, just over one year in, Mr Waters earlier this month informed Charlie Flanagan of his intention to stand down early next year during the same phone call in which he told the Minister for Justice about the discovery of the controversial email to Frances Fitzgerald on the aggressive legal strategy being pursued by former Garda Commissioner Noirín O’Sullivan against whistleblower Maurice McCabe.

But, against the backdrop this week of Ms Fitzgerald’s resignation from Cabinet, Mr Waters accelerated his plans from the planed February departure and stood down immediately.

As he departed, he strongly defended the department - which he said had been “subject to a barrage of unwarranted criticism” - in an email to colleagues.

“I want to assure you that, in so far as is humanly possible, this Department has sought at all times to act appropriately, upholding the law and the institutions of the State,” he wrote. “Many of the claims about how the Department has acted that have been made in the media and in the Dáil are not true.

“The Department makes an important contribution to Irish society, a contribution that more often than not goes unseen and unnoticed,” he added, urging staff not to “not lose sight of your contribution to public service and continue to give your best”.

“Through the years I have worked with truly talented and honourable people and each and every one of you work to make Ireland a safe, fair and inclusive place to live and work.”

His successor will have to decide if those sentiments hold true, and will deal with a much different, and more charged, environment. Taoiseach Leo Varadkar this week told the Dáil he will seek personal accountability from senior officials, an unprecedented step which has caused anger across the higher levels of the civil service.

It has created a view that the process of recruiting Mr Waters's successor will be even more difficult, since politicians, not officials, are usually the front of house figures for government departments.

Another problem with the Department of Justice, according to those with knowledge of how the higher levels of the civil service operate, is that the senior ranks of officials have not seen much change in personnel and have not been opened to outsiders.

One figure also argued that the salary of around €200,000 is unlikely to attract an external candidate, especially when the considerations of such a high profile role are taken into account. “Are you prepared to enter public life and enter the public arena?”