Varadkar believes former tánaiste to be vindicated at Disclosures Tribunal 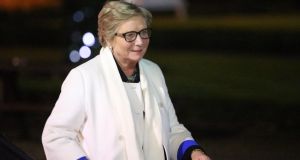 Taoiseach Leo Varadkar has said he wants former tánaiste Frances Fitzgerald to return to the top level of politics in the future.

Speaking to the Fine Gael parliamentary party on Wednesday evening, Mr Varadkar told TDs and senators Ms Fitzgerald should return to a senior position after she had appeared at the Disclosures Tribunal.

While Mr Varadkar was not specific about what post Ms Fitzgerald could return to, one source present took the “gist” of what he said to be a return to Cabinet.

Sources said the Taoiseach claimed this would be done after the tribunal vindicates the former minister for justice.

Ms Fitzgerald, who was last night confirmed as a Fine Gael general election candidate in Dublin Mid West, where she is seeking to retain her seat, was at the meeting.

Radical changes to the “dysfunctional” Department of Justice were promised by the Taoiseach on Tuesday as he announced the resignation of Ms Fitzgerald to the Dáil, ending a political crisis that had threatened a snap general election before Christmas.

After a dramatic night and morning at Leinster House, Ms Fitzgerald bowed to the inevitable and tendered her resignation to save the Government from defeat to a Fianna Fáil no confidence motion which was only hours away from the floor of the Dáil.

Her resignation had been sought by Fianna Fáil following revelations of emails which showed she had been alerted to an aggressive Garda legal strategy aimed at the Garda whistleblower Sgt Maurice McCabe during the 2015 hearings of the O’Higgins commission.

The commission was examining Sgt McCabe’s allegations of Garda malpractice.