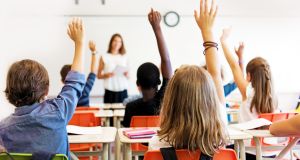 Unions have strongly criticised the current two-tier pay structure which has seen those recruited since 2011 paid less than those in place prior to that date.

There has been a collapse in the number of people applying to study for qualifications to become second level teachers due to pay inequality, education sector unions claim.

In a joint submission to the Public Service Pay Commission on Wednesday, the Teachers’ Union of Ireland (TUI), the Association of Secondary Teachers Ireland (ASTI) and the Irish National Teachers’ Organisation (INTO) argued that pay inequality in the profession had created a recruitment and retention crisis in teaching.

The unions called for an acceleration in the process of pay restoration for teachers employed since 2011.

Unions have strongly criticised the current two-tier pay structure which has seen those recruited since 2011 paid less than those in place prior to that date.

The Public Service Pay Commission is beginning an examination of recruitment and retention difficulties in different parts of the public service and is expected to issue its findings next year.

In their joint submission, the three unions said there was an “emerging crisis” which had seen a sharp fall in applications to teacher education courses, an increase in emigration amongst recently-qualified teachers and increasing difficulties in filling posts and employing substitute teachers.

“No substitutes were claimed by schools for nearly 27,000 days during the first part of the year. This situation has deteriorated further since September 2017”, the unions said.

The submission also maintained that at post-primary level, there had been “a collapse” in the number of applicants in for the professional masters of education (PME), particularly in the STEM and modern languages areas in recent years.

INTO president John Boyle said one of the the consequences of pay inequality was serious teacher shortages in Ireland, while Irish teachers were employed abroad. He said in schools here, “the erosion of young teachers’ morale and the growth of discontent are real life impacts of indefensible, unjust and discriminatory pay rates”.

TUI president Joanne Irwin said: “There has been a drop of over 50 per cent in PME applications (the PME is required to teach at post-primary level) in recent years with an even sharper drop in applications in specific subject areas.

“ Increasingly, graduates who may once have considered teaching are now looking at other employments where they are guaranteed better remuneration. If the quality of our high-performing education system is to be maintained, an acceleration of pay restoration for those employed since 2011 is an absolute necessity.”

ASTI president Ger Curtin said that until recently, Ireland was one of a handful of countries in the OECD which did not face recruitment and retention problems in teaching. “However, just as we have been warning for the past few years, that situation has now changed. Pay inequality is at the heart of this issue.’