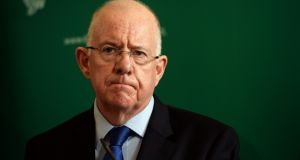 Minister for Justice Charlie Flanagan said he understood the Charleton tribunal could investigate the Department of Justice. Photograph: Eric Luke

The Charleton tribunal has the powers to investigate recent revelations relating to the Department of Justice, the Dáil has been told.

Minister for Justice Charlie Flanagan said this was his view and it had been confirmed by legal advice from the Office of the Attorney General.

He said the tribunal, which is investigating an alleged smear campaign against Sgt Maurice McCabe, had been sitting in private session recently.

“I am of the view that because the tribunal has not been holding public hearings, perhaps members have overlooked its very wide and comprehensive terms of reference,’’ he added.

The Minister was replying to a Sinn Féin motion to revise the terms of reference to include revelations relating to the Department of Justice, ministers for justice past and present, the Attorney General’s office and An Garda Síochána.

Mr Flanagan said he very much recognised the disquiet and concern expressed in the Dáil and the Seanad in recent days about matters pertaining to material discovered by his department recently, following a number of search and retrieval processes.

Two emails to former tánaiste Frances Fitzgerald indicating the Garda’s “aggressive” strategy towards Sgt McCabe during the 2015 hearings of the O’Higgins commission, which had not previously been disclosed to the tribunal, emerged on Monday. Another similar email emerged a week earlier.

The O’Higgins commission investigated alleged Garda malpractice in the Cavan-Monaghan division of the force.

The documentation, the publication of which led to the ultimate resignation of former justice minister Frances Fitzgerald on Tuesday, has now been sent to the Charleton tribunal.

Sinn Féin justice spokesman Donnchadh Ó Laoghaire said it had been clear in recent days the Department of Justice had quite serious and fundamental problems.

The Toland report, an independent review of the department completed in 2014, had found a “secretive and closed’’ department, with “significant leadership and management problems’’.

It had recommended “fundamental and sustained organisational and cultural change’’, he added.

“The quite shocking revelations of recent weeks underline this even further,’’ Mr Ó Laoghaire added.

He said the latest review of the department initiated by Taoiseach Leo Varadkar on Tuesday should be carried out by somebody outside the Civil Service.

The Sinn Féin private members’ motion will be voted on in the Dáil on Thursday. However, Mr Flanagan said that because he believed the existing terms of reference covered matters within the Department of Justice that emerged recently, he would be opposing the motion.