Coronavirus: Westmeath has highest rate of Covid-19 outside of Dublin

Both Westmeath and Dublin rates significantly higher than rest of State 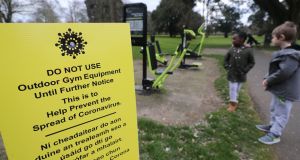 Oisín Carson (5) and Isabella Fayeun (6) standing near a Covid-19 notice near an outdoor gym that has been closed due to coronavirus restrictions in Athy, County Kildare. Photograph: Niall Carson/PA

Westmeath currently has the highest rate of coronavirus cases outside of Dublin, analysis of the Health Protection Surveillance Centre’s data shows.

This Irish Times analysis of the HPSC’s figures is based on the latest breakdown of data by county made available of 2,990 confirmed cases as of midnight, March 30th.

The analysis shows that the highest rates of coronavirus, also known as Covid-19, are currently in Leinster with Dublin having 122.1 cases per 100,000 population followed by Westmeath (90.1), both of which are much higher than the rest of the country. Calculating the rate per 100,000 population allows for a like by like comparison between counties.

The rate is based on confirmed cases only and does not paint the full picture of any particular county with rates likely to be higher in all areas. As of Sunday, 15,000 people were waiting to be tested for Covid-19 and about 1,500 people are being tested per day for the virus.

While these rates change on a daily basis, Westmeath has been among the counties with the highest rates over the past number of days and its incidence rate is currently 13 times greater than Carlow, the county with the lowest rate of Covid-19 cases, at 7 cases per 100,000 population.

Public Health Agency data published on Wednesday shows there are 689 cases of Covid-19, with 30 deaths across the North’s local government districts. An Irish Times analysis of the North’s Public Health Agency data shows that Belfast, has the largest number of cases (200) and the highest rate of Covid-19 infections of all local government authorities in the North at a rate of 58.5 cases per 100,00 population. Belfast’s rate is almost five times that of Causeway and Glens local government district which on Wednesday had a rate of 12.5 confirmed cases per 100,000. It is unknown what districts 39 of the 689 came from. The North and South are taking differnt approches to testing with the Republic  following a South Korean model of testing, tracing and isolation to suppress cases whereas the North is not testing as widely.

The analysis on the State’s figures were carried out using data from the Health Protection Surveillance Centre and the figures published on the map of Ireland here, accessed on April 1st.

In the North, figures for each of the local government districts cases are available from the Public Health Agency here. And the rate was calculated using Nirsa’s estimated population for 2018 available here.