Tesco staff strikes: everything you need to know

Staff at eight Tesco stores around the country have mounted pickets outside their stores as members of the Mandate trade union commenced an indefinite strike in a dispute over contracts. Video: Bryan O'Brien 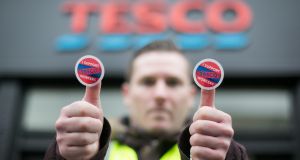 Tesco employee Brian Lawless during a strike at the store on Baggot Street, Dublin. Members of the Mandate trade union have started an indefinite strike in a dispute over contracts. Photograph: Gareth Chaney Collins

What’s going on with Tesco this week?

An indefinite strike in eight stores in Dublin, Kerry, Longford, Meath, Offaly and Wicklow. Eight more in Dublin, Monaghan and Wicklow will join the strike on Friday. Twenty-three more will ballot next week.

What is the strike all about?

It depends on who you believe. Management and Mandate Trade Union present sharply differing accounts in a row that has been rumbling on for more than a year.

Where would be a good place to start?

Mandate claims Tesco moved without agreement to worsen conditions for staff who started working before 1996. Tesco, it says, wants to put all staff on the same contracts – worse than the ones enjoyed by pre-1996 staff.

What does Tesco say?

It flatly denies that. Yes, it wants the option to change shift patterns, but insists it is not lessening terms and conditions. Shifts should reflect 21st-century realities – not the pre-1996 era before late-night and online shopping, it says.

It wants, it says, to improve its customer service and that the old terms are no longer suitable because too many people have to be rostered to work during quieter times.

Tesco claims that it has negotiated with Mandate for 12 months on compensation due to staff who accept changes. Last August, the Workplace Relations Commission (WRC) issued settlement proposals. Tesco says it accepted them, but Mandate did not. The Labour Court was then asked to intervene. In November it called for eight weeks of local engagement. If no resolution was reached then “the WRC proposals should then be accepted”, it said.

What exactly did the WRC recommend?

Current wages for pre-1996 employees would be protected, along with a guaranteed 5 per cent bonus and overtime rates. Sunday work would be voluntary. Workers losing income for any reason would get compensation worth double the lost sum. Remaining pre-1996 staff would get a €2,000 lump sum. Those who left would get redundancy worth five weeks per year of service – a deal worth €105,000 on average, Tesco says.

That sounds alright, so what happened next?

Management says it accepted the recommendations and the union rejected it and refused to be involved in the eight-week period of engagement.

What does Mandate say to that?

It says when it sought clarification from Tesco about elements of the recommendations Tesco refused and that led – at least in part – to the current impasse.

Does Tesco have a response to that?

It does. Mandate, it says, always wants Labour Court recommendations implemented, yet it is rejecting this one. How can Mandate justify encouraging customers to shop in other non-unionised retailers, it asks, when this could hurt everyone working in Tesco, the only major retailer to recognise unions.

How many people took the package?

Nearly 700 have gone – there are about 250 people who still work under the old contracts.

And how many people does Tesco employ?

And is it just those employees who are on strike?

No. The employees directly affected by the changes voted against the Labour Court recommendations. Mandate then carried out “supportive ballots” among members not directly affected. Seventy per cent of them voted to back their colleagues. Not all the stores where pre-1996 employees work have been balloted. Of the stores that have, 16 are either on strike or plan to go on strike later this week. Six have voted against strike action and two – in Sligo and Ballina – are to hold a second ballot after a “technical error” saw votes of pre-1996 workers added to the votes of post-1996 ones, which created legal problems.

Do these “technical issues” apply to other stores?

The union insists that it does not. Tesco questions that.

Right, back to the actual as opposed to the technical issues. Will the pre-1996 staff’s pay be hit by the changes?

Mandate says Tesco wants to “unilaterally impose” a 15 per cent pay cut. Tesco says the Labour Court recommendation makes clear that pay will be protected. In fact, it says, 90 per cent will get a pay rise.

So management and Mandate are completely at odds on what the recommendations mean?

It seems that way. Mandate say nightshift workers, for example, would lose as much as €200 per week because under the new contracts Tesco would have the “flexibility” to move them to day shifts.

But the recommendations say if staff lose income they will be compensated, right?

Right, but when we put this to Mandate it said this was this sort of issue that it needed clarification on – clarification that, it says, Tesco is refusing to give.

What is really going on here?

The union believes this is the thin end of the wedge. Given that just 250 pre-1996 workers are left, Mandate asks why Tesco could not come up with rosters that would reflect 21st century retailing without changing their contracts. Tesco’s real aim, it says, is to create division between employees and marginalise a small group before moving on to the contracts of other union workers. Tesco says this is completely untrue.

Tell me more about the thin end of the wedge?

It is not just Mandate who think that Tesco has longer-term anti-union objectives. In the Dáil this month Independents 4 Change TD Joan Collins accused Tesco of “union-busting”, saying its “Project Black” plan bids to get rid of 1,200 long-serving secure and well-paid workers.

Mandate will have you believe it is. Tesco insists it is entirely benign. The fiercest of Tesco’s critics claim that it is a long-term plan the retailer has to break up the unions. Tesco says it is a plan to get back into the black after several years of difficult trading. “Nothing more, nothing less,” it says. Unlike Dunnes Stores, Lidl and Aldi, Tesco says it recognises unions and accepts collective bargaining.

But did Tesco not send out a letter to its staff encouraging them to leave the union?

No, it did not – although there were claims to the contrary. Last week, the Irish Congress of Trade Unions said Tesco had encouraged workers to leave their unions. It said letters from a company director were distributed to staff, offering to help them leave their trade unions. But Tesco said it fully respected staff’s right to union membership. It did not, it said, write to union members encouraging them to leave. If staff, however, wished to stop paying union dues that was facilitated, as happens in every other firm.

Where is the dispute likely to go next?

Workers in 23 stores will ballot next week. Once those votes are counted all the stores where pre-1996 staff are employed will have been balloted. If there is no resolution then ultimately, Mandate will ballot all Tesco stores.

And are any stores closed?

Not as yet. Some staff have crossed picket lines. The union says not many have. Management from other stores have been drafted in from to work in the affected shops. How long that can be sustained is hard to say.