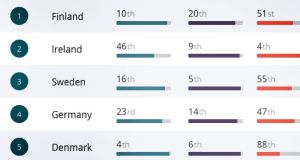 Finland and Ireland led the Good Country Index of 153 countries

Ireland is ranked in second place in the Good Country Index.

The Index of 153 countries measures what each contributes to the “common good of humanity and what it takes away, relative to its size”.

Finland has claimed the top spot in the index, followed by Ireland, Sweden, Germany, Denmark, Switzerland and Norway. France, Spain and Canada also feature in the top ten of the Index.

Iraq has been placed last in the rankings, below Libya and Yemen. Ireland was ranked first in the annual Good Country Index in 2015.

Ireland’s overall ranking was due to high scoring in its global contribution to international peace and security, prosperity and equality, health and wellbeing and culture categories.

Its ranking in global contribution to world order, planet and climate, and science and technology were slightly lower.

The index says it uses a “wide range of data” from the United Nations and other international organisations. The rankings were based on data collected in 2014.