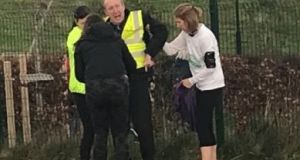 Minister for Transport Shane Ross receives assistance after he fell and broke a number of fingers while acting as a race marshal. Photograph: The Irish Times

The Minister for Transport Shane Ross has suffered two broken fingers and a third dislocated finger after he fell at Marlay Park in Dublin on Saturday morning.

Mr Ross was volunteering as a marshal at a park run when he fell. He was left with a number of broken fingers after the fall but a source said he is “grand” and “is back canvassing” with his team already.

Last week Mr Ross tweeted he was “enjoying (a) regular stint as a marshal at the 5k Marlay Park run.”

He is listed as one of a group of volunteers on the Marlay Park parkrun page.

An onlooker on Saturday described the fall as a “bad tumble” and said he appeared to be in a considerable amount of pain.

Mr Ross is looking to be re-elected in the constituency of Dublin Rathdown and is a member of the Independent Alliance.