Teenager airlifted to hospital after being ‘hit by bus’ in Arklow, Co Wicklow, gardaí say 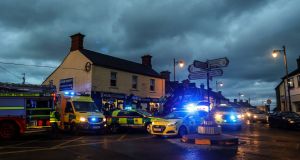 The scene of a major rescue operation where a child was trapped under a bus in Arklow, Co Wicklow. Photograph: Garry O’Neill 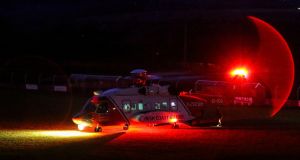 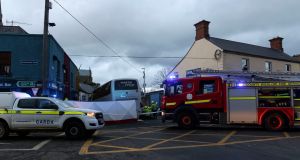 A 14-year-old schoolboy who was hit by a bus in Arklow, Co Wicklow on Thursday has been airlifted to Temple Street Children’s Hospital in Dublin for treatment.

It is understood that he was crossing the road on the town’s Main Street when the incident occurred at about 4:30pm. He is believed to have been conscious and was able to speak to paramedics at the scene.

An eyewitness said the child appeared to have been trapped under the bus and a screen was erected around the vehicle while he was attended to by emergency services personnel.

A major emergency services response was conducted including gardaí, fire brigade, ambulances. Heavy lifting and cutting equipment were at the scene.

Gardaí confirmed they attended the scene of a single vehicle road traffic accident.

“A male youth in his teens was hit by a bus. The road is currently closed. No further information is available at this time,” gardaí said in a statement.

The Coastguard dispatched a helicopter which landed at Pearse’s Park GAA ground at about 5:15pm.

Once the boy had been assessed, he was airlifted to Dublin Airport where he landed at 6:15pm before being transferred to hospital.

He was accompanied by a family member, a doctor and a paramedic. His exact condition is not known but his injuries are not believed to be life threatening.