Gaiety Theatre projectors to be auctioned off next week 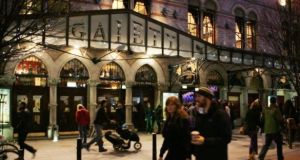 The pair of projectors from the Gaiety Theatre will be among hundreds of items from Dublin’s social scene up for sale in a 1,400-lot auction. File photograph: Cyril Byrne

If you ever fancied owning your own permanent link to the 20th-century Dublin of the rare auld times, two old projectors from the capital’s Gaiety Theatre are set to be auctioned off next week.

The pair of large metal and brass projectors are thought to be more than 100 years old, and were found by chance up in the rafters of the city centre theatre during refurbishment work a number of years ago.

A bit big for a Christmas stocking filler, the 1.6m-long projectors require at least two people to lift them.

The items are to be sold off by auctioneer Niall Mullen, at a sale in Eureka House, Kells, Co Meath, on December 8th and 9th.

“They are from the Edwardian period and were either suspended or put up on a tripod at the back of the theatre, projecting on to the screen,” Mr Mullen said.

“They are an absolute wonder but exceptionally heavy and require two very strong people to lift them,” he said.

The guide price for the pair of projectors is between €800 and €1,200, however Mr Mullen said from a “nostalgia point of view” the items could fetch more than that, depending on the bidding.

“We would be expecting interest from people into theatre or drama and if you wanted a prop, they would be glorious. They are pieces of Dublin history and that is why they are important,” he said.

The projectors were being put up for auction by events promotion company MCD, the current owners of the Gaiety Theatre.

They are thought to have been first bought in the early 1900s, at a time when the South King Street theatre was undergoing extensive renovations.

It is not known when they were decommissioned from use, and had been kept in storage for a number of years. It is likely they were only saved from ending up on a scrap-heap by a stroke of luck, Mr Mullen said.

Typically when older equipment is taken out of use during a refurbishment it would be given to scrap yards, so Mr Mullen said it was “nice that they were salvaged”.

The pair of projectors will be among hundreds of items from Dublin’s social scene up for sale in a 1,400-lot auction, run in partnership with Victor Mee Auctions.