Dr James Gray tells management of ‘nursing crisis’, with facilities set to close as a result 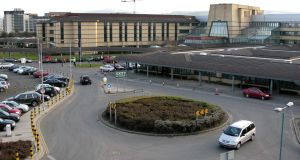 Tallaght Hospital. Consultant Dr James Gray said there was “a nursing crisis” in the emergency department

A consultant at Dublin’s Tallaght Hospital has written to management stating that “it remains dangerous and unsafe” in the hospital’s emergency department.

Dr James Gray emailed management on Wednesday morning outlining his concerns, including how there were 17 patients waiting to be seen by clinicians in the emergency department, and pointing out the “longest one is almost nine hours languishing”.

“It is only a matter of time before there is the next cardiac arrest, serious morbidity or mortality in the waiting room and/or amongst the admitted boarders when the care cannot be provided safely and particularly when there is a critical shortage of nursing resources on the floor,” he said.

Tallaght Hospital said it could not discuss individual patient situations, but that “as a large, busy hospital we are on occasions forced to manage patients whose clinical condition may have suddenly deteriorated in a non-treatment area”.

In his email Dr Gray said there was “a nursing crisis” in the emergency department at the hospital, and it was short four nurses on Wednesday.

He said he had been informed nurses intended to close six cubicles, while the rapid assessment unit in the emergency department would not open on Wednesday and the ambulatory care unit would close in the evening.

Dr Gray confirmed later he has not provided an on-call service since November 10th, and that his position would remain the same “until the hospital deals with this”.

He told management “I will not allow myself to remain vicariously liable for an unsafe department out of hours”.

Speaking on Wednesday afternoon, Dr Gray said there were 27 patients waiting to see an emergency department doctor at Tallaght Hospital at that time.

“There’s a maximum wait of six hours in that waiting room at the moment. They should not be waiting six hours because a number of them are category three patients, which means that they should be seen within one hour maximum.

“They’re presenting with headaches, abdominal pain, unstable diabetes, trauma, back pain, chest pain. These are patients who need to be seen, and if you don’t have the space to see them, unfortunately they can’t be seen. That’s what makes it unsafe.”

Tallaght Hospital said it had appropriate on-call emergency department consultant cover and was continuing to operate as normal.

“The hospital is currently seeing a large number of patients being admitted via ED, and as a result has activated its full capacity protocol arrangement,” a spokesman said.

“As of this afternoon there were 12 patients on trolleys in ED with 33 additional patients being accommodated in escalation beds/trolleys elsewhere in the hospital in accordance with the agreed escalation procedures.”

The hospital added it was “working at all times to minimise trolley numbers”, and that it has had a 58 per cent drop in trolley numbers in its emergency department since 2010.

The Irish Nurses and Midwives Association (INMO) said the situation in the emergency department at the hospital “remains intolerable” and that ongoing staffing difficulties and overcrowding issues were raised at a meeting with management last week.

Joe Hoolan, an INMO industrial relations officer, said “like every other hospital, they’re finding it difficult to get staff in”.

“Tallaght [hospital] is in a difficult position at the moment, they acknowledge that. They are struggling on a day to day basis to maintain safety as best as they can.”

Figures from the INMO put the number of patients on trolleys in emergency departments or on wards across the country on Wednesday at 452.