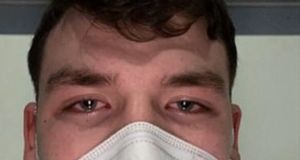 Brandon Fay (17) who was hospitalised with the coronavirus. Photograph: Mater Hospital.

A 17-year-old who was hospitalised with the coronavirus has told of his shock after testing positive for the condition as he thought he was “untouchable” as a young person.

Brandon Fay (17), from North Strand, north inner city Dublin, came home after hanging out with a friend on March 24th and started to feel unwell.

The next day he had a routine hospital appointment where his consultant noted his persistent coughing. “I just had a cough and shortness of breath, I thought it was the pollen in the air and asthma,” he told The Irish Times.

While in the Mater Hospital he was taken for an assessment where medics told him he had a suspected case of coronavirus, and admitted him into an isolation bed.

Two days later the results of his swab came back positive for Covid-19.

“On the Friday I was diagnosed with coronavirus, I thought I was going to die. You read in the papers every day about the deaths and you don’t hear about people recovering,” he said.

Before his diagnosis he had assumed the disease only affected the elderly. “I was shocked, I thought I was untouchable, thought I was superman,” he said.

Latest figures from the Health Protection Surveillance Centre (HPSC) shows 43 people aged between 15-24 have been hospitalised with Covid-19, with three requiring admission to intensive care.

While believing he was unlikely to get the virus Brandon had still been regularly washing his hands and observing social distancing, he said.

While in an isolation bed nurses communicated with him through an intercom and his doctors spoke to him by phone, and all the staff were “phenomenal,” he said.

“It was depressing, there was no light. I was in isolation and couldn’t see my Mum ...The shortness of breath was getting worse and worse,” he said.

However, after several days he was moved onto a Covid-19 ward, where his condition began to improve.

“My Mum was up the wall worried, but was phoning all the time,” he said. His father died when Brandon was 8-years-old so his mother is his “best friend,” he said.

When his condition continued to improve he was discharged to quarantine in a room at home until his 14 days since contracting the disease were up.

In the last four days he is now clear of the coronavirus and has been able to travel to the shops, however he said there is a “stigma” from having the condition.

People in his local area who were aware he had the disease now “cross the street when they see you coming,” which made him feel “like a zombie,” he said.