Covid-19: The EU’s response to the pandemic has been slow, stingy and fearful

Javier Cercas: Coronavirus is a dangerous test of the EU’s ability to keep nationalism in check 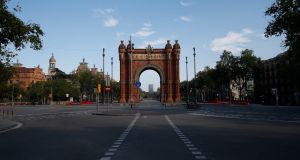 The Arc de Triomf in Barcelona, during a national lockdown to prevent the spread of the Covid-19. Photograph: Pau Barrena/AFP via Getty Images

For more than two weeks I’ve been shut up at home in Barcelona with my wife and son. I only go out to buy food in spectral supermarkets, after having walked through the streets of a ghost town in a paralysed, phantasmal country, with its dormant economy.

As of today, according to official figures, 18,056 people have died from coronavirus in Spain, and more than 172,541 people have tested positive. Reality has suddenly acquired the texture of a nightmare, as if it had turned into a Franz Kafka novel.

I am constantly reminded that I belong to the first generation of Europeans who haven’t lived through a war – at least, not forgetting the former Yugoslavia, a war between great powers. It’s possible that an awareness of this startling fact may have inculcated us with the innermost conviction that, once free of certain hindrances of the past (in Spain, for example, the terrorism of Eta), we would be spared the calamities that befell our ancestors.

This baseless optimism began to crack on September 11th, 2001 and became much more fragile with the financial crisis of 2008; but what nobody could have anticipated is that it would finally collapse under a plague with biblical resonances that has confined us all to lockdown for an indefinite period of time. One thing is clear: the only predictable feature of history is its unpredictability.

The political scientist Ivan Krastev claims that the coronavirus crisis will strengthen nationalism in Europe. It doesn’t seem such a reckless theory: the big crises of the last two centuries have certainly had that effect. The reason for this phenomenon is obvious: a catastrophe generates fear, and nationalism presents itself as the ideal antidote, in as much as it forms, in the face of uncertainty, the refuge of a community bound by ties of blood. The problem is that this refuge offers us much less protection than citizenship, a refuge grounded in rationality and bound by the ties of law.

Historically, there is glaring evidence of this problem in Europe, where a strengthening of nationalism has unleashed conflict, crisis on a far greater scale. This happened with the Wall Street crash of 1929, which led to the second World War. It has not happened since the 2008 crash because the European Union has kept the resurgence of nationalism in check, which is what it was created to do. Will it still be able to do so?

If the coronavirus crisis takes on the economic dimensions of the 2008 crisis (or worse), as Christine Lagarde, president of the European Central Bank, fears it will, could the EU withstand two consecutive crises of such gravity? Bearing in mind that the last crisis was on the brink of wiping out the euro, this is the crucial question.

There is no doubt that our big problems, as this crisis highlights once again, are transnational ones, but we have almost exclusively national instruments at our disposal to resolve them. It is a bit like trying to open a safe with a headbutt. On top of all that, politicians are making depressing use of our scant transnational instruments, as the slow, hesitant, stingy, unsupportive and fearful reaction of the EU to the pandemic has demonstrated.

Walter Benjamin wrote that to be happy is to be able to live without fear. Since the outbreak was declared a pandemic, we have not been able to live without fear in Spain, across Europe, or anywhere else – at least, not without fearing for the lives of many people. Nor should we: bravery does not mean having no fear – that is temerity – but overcoming it, doing what must be done and carrying on. Right now, that’s what matters. – The Guardian

Javier Cercas’s latest book, Lord of All the Dead, translated from the Spanish by Anne McLean, is published by MacLehose