‘That’s another shovel to add to my collection’ – Leo Varadkar 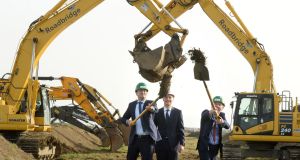 “That’s another shovel to add to my collection,” said Leo Varadkar after he’d finished throwing muck at a phalanx of photographers assembled to watch him and Shane Ross turn sods marking the start of work on the long awaited North Runway at Dublin Airport.

As the Taoiseach and his transport minister stood under diggers artfully parked to resemble a love heart for the Valentine’s Day that was in it, the pair crossed their twin shovels - both of which came with added brass plaques to mark the occasion - and their pose prompted Leo to mangle the star-crossed lovers quote from Romeo and Juliet.

There was no love lost for the Taoiseach among the small group of protestors who had gathered at the temporary gates what will someday be a 3.1km runway.

It will - according to the Dublin Airport Authority (DAA) - become the key gateway into Ireland and help create tens of thousands of jobs and contribute billions of euro to the economy.

Sheela Morris was one of the protestors. She belongs to the St Margaret’s Concerned Residents Group who have campaigned for years to have activity at the airport restricted overnight so they can get some sleep.

She said the DAA had completely ignored local resident’s concerns about the runway and warned that the lifting of planning conditions restricting the number of flights to and from the airport between 11pm and 7am would have a “massive impact” all their lives.

“Our homes will be deemed worthless,” she said. “We won’t be able to live here. We have a voluntary buyout scheme out to us which is absolutely not fit for purpose.”

“They are saying we are insignificant,” she continued. “But people matter, we matter, we have been living here for three generations. These are our homes and our lives. This is not just about bricks and mortar.”

In response a DAA spokesman said: “The voluntary house purchase scheme, which applies to 38 houses, offers to pay a 30 per cent premium on the market value of each house. That the value will be assessed as if the North Runway was not being built. The scheme is entirely voluntary and if an owner decides not to participate, their house will be insulated by DAA to the highest standards.”

Around 250 homes are likely to be significantly impacted by the new runway and Mr Varadkar insisted that while the concerns of local people were not being ignored he was more focussed on what he described as “the greater good.”

“That’s always the way with these projects,” he said. “You have to balance local concerns on the one hand with the needs and the greater good of the entire country. This airport is Ireland’s gateway to the world.”

Mr Ross echoed his comments and said it was “absolutely wrong” to say local residents had been ignored in the process.

This week the Oireachtas passed legislation making Fingal County Council the noise regulator for the airport and its perspective will be pivotal when An Bord Pleanála determines if the planning conditions need to be amended.

The DAA chief executive Dalton Philips said they would have to be changed and he warned that if the number of flights the airport could handle overnight and in the early morning was restricted to 65 then it would be “catastrophic” for the airport and the country.

“We want to challenge those conditions,” he said. “We don’t take it lightly. As the Taoiseach said, it’s about the wider economic good. There are residents that are impacted and we clearly engaged with them and we’re concerned about that.”

The runway which has been talked about since the 1960s will cost around €320m and will be financed from the DAA’s revenue and borrowings with no bills landing at the Government’s door.

The development will involve more than 300,000sqm of runway, 6km of internal roads, two electricity sub stations 11km of CCTV cable and 2,100 new runway lights. A new airport tower is also being build as well as €1.2 billion worth of improvements, including boarding gates are getting underway.

All going to plan, the runway will be finished within two years with planes set to land and take off from it by 2022.