Taken 50 years ago: A photo of Earth as it had never been seen before

‘Grand oasis in the big vastness of space’: ‘Earthrise’ captured by Apollo 8 astronaut 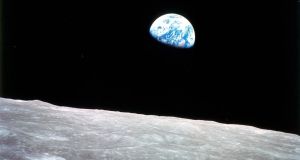 Earthscape: Our planet, as never seen before Christmas Eve, 1968

On Christmas Eve 1968, 50 years ago, one of the most famous photographs in history was taken.

Earthrise depicted our planet as it had never been seen before – a “grand oasis in the big vastness of space”, according to Jim Lovell, the commander of Apollo 8.

The photograph was taken by William Anders, one of the three-man crew of Apollo 8 which was launched on December 21st 1968.

They became the first human beings in history to leave Earth’s orbit and then to look back and see their home planet in its entirety.

The photograph depicts the Earth half in shade – a brilliant blue marble against the greyness in the foreground of the moon.

The Earth is seen tilted and at a right angle to the orientation we are familiar with. The north and south poles are actually east and west from the viewpoint of the Apollo 8 crew.

For the nascent environmental movement, the sight of Earth framed against the infinite desolation of space crystallised the notion of our planet as a fragile ecosystem.

The crew had carried out several orbits of the moon and their eyes were firmly fixed on the lunar surface. Part of their mission was to scout places where man might land on the moon.

Then they looked up and saw the sight of the Earth half in shade, half in sunlight. In all their intense preparation for the mission, nobody had prepared them for the uniqueness of the moment.

“I don’t know who said it, maybe all of us said, ‘Oh my God. Look at that!’”Anders remembered. “And up came the Earth. We had had no discussion on the ground, no briefing, no instructions on what to do. I jokingly said, ‘well it’s not on the flight plan,’ and the other two guys were yelling at me to give them cameras. I had the only colour camera with a long lens.”

The photograph was not published until they returned on December 28th. By that stage the three crew were the most celebrated people on the planet they had temporarily left.

Though it has been eclipsed in status and prestige by the actual moon landings of Apollo 11 eight months later, the Apollo 8 mission at the time captured the imagination of the whole world.

On Christmas Eve 50 years ago the crew decided to send a message home to Earth to coincide with primetime in the United States. The three men were instructed by Nasa to say something appropriate.

They read from the opening passages of the Bible, the book of Genesis which begins: “In the beginning God created the heaven and the earth. And the Earth was without form, and void; and darkness was upon the face of the deep. And the Spirit of God moved upon the face of the waters. And God said, ‘Let there be light’: and there was light.”

They finished the reading by wishing a merry Christmas to “all of you on the good Earth”.

The year of 1968 had seen much violence and unrest in so many places. America was convulsed with demonstrations against the Vietnam War. The assassinations of Dr Martin Luther King jnr and Bobby Kennedy had extinguished hope for so many people.

The crew members were named Time magazine’s “Men of the Year” for 1968 upon their return. They were feted for having brought back hope at a time of intense despair.

“We got millions of telegrams after we landed, but the one I remember most was, ‘Congratulations to the crew of Apollo 8. You saved 1968’,” recalled Frank Borman, the third member of the crew.