‘Get in, get out, get warm’: Advice for your Christmas swim

‘Don’t stand around chatting in your togs’: Practical tips from Irish Water Safety 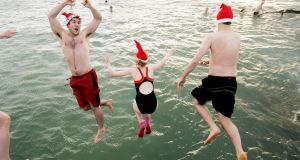 ‘It is not a good idea to jump or dive in...’. Photograph: Alan Betson/The Irish Times

With the good weather forecast for Christmas Day it is expected that many people will participate in charity swims around the country in rivers, lakes and the sea, organisation head John Leech said on Monday morning.

However, he warned that freshwater is colder than the sea so anyone contemplating swimming in a river or lake should keep their swim very short.

“Get in, get out quickly, get warm,” he told RTÉ’s Morning Ireland.

He also suggested that swimmers should enter the water gradually and should splash water on the back of their neck. He cautioned swimmers to be careful when walking on slipways.

Swimmers should stay in their depth so that if they become dizzy or get a cramp they can easily wade from the water, he said.

“It is not a good idea to jump or dive in because of the danger of cold water shock,” he said.

Mr Leech also advised not to drink before swimming as alcohol increases the heart rate which, when combined with the cold water could cause cramp or panic.

When swimmers get out of the water after their swim they should warm up quickly to avoid hypothermia: “Don’t stand around chatting in your togs.”

He said he would encourage people to participate in a Christmas swim as there are fantastic health benefits.

According to Met Éireann, Christmas Day will be dry in most areas. It will be cloudy with a possibility of patchy drizzle, especially in southern coastal areas.

Patches of mist and fog are predicted and temperatures are set to be mild, with maximums of 10 to 12 degrees.