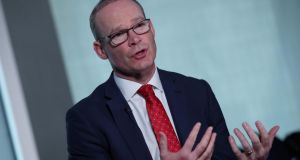 The Tánaiste has insisted the Government and European Union will support Irish farmers following UK threats to import Brazilian beef on a tariff-free quota basis in the event of a no-deal Brexit.

Mr Calleary said the Irish beef sector was worth €5.25 billion a year and 52 per cent of its exports went to the UK, putting €1.25 billion of the economy “at peril”, if Britain was prepared to favour the import of Brazilian beef over Irish produce.

He said farmers were awaiting clarity on the issue as he accused the Government of inaction.

Mr Coveney rejected the claims and insisted during Leaders’ Questions in the Dáil that “this Government will not be found wanting” and would support farming to ensure it survives through a Brexit transition period in the event of no deal.

Significant funds would be available and state-aid rules relaxed to support vulnerable sectors.

He said the department had looked at the worst-case scenario and there had been discussions with the European Commission, and agriculture and rural development commissioner Phil Hogan.

A commitment had been given that farmers would be supported during a transition.

Meanwhile, the European Commission will today announce reforms to the bloc’s strict state-aid rules which, on the eve of Brexit, will increase the amount of financial support governments can give farmers.

Although the commission will not make any explicit link between the announcements and Brexit, well-placed sources in Dublin said the news was intimately tied up with the imminent exit of the UK from the EU, as it was targeted specifically at farmers and food exporters – the two sectors of the Irish economy most exposed to a hard Brexit.

Under the reformed state-aid rules, farmers could be in line to receive payments of up to €25,000 a year without prompting additional scrutiny from the EU.

This will be achieved by the adoption of revisions to the so-called de minimis state-aid rules, which impose a ceiling on how much a government can give to a farmer without the risk of being found to be in breach of the EU’s strict competition and market distortion laws.

Previously, farms could not be paid more than €15,000. However, Mr Hogan will announce that the limit on payments over a three-year period will be raised to €20,000.

It is understood that if a member state performs to certain technical specifications, the rules will become more relaxed again.

For example, if a country spends less than half of its total permitted national aid  on one particular agricultural sector, payments to farmers of up to €25,000 over three years will be permitted.

On top of this, the ceiling on what a country can spend on aid will also be increased.

This limit is currently 1 per cent of a member state’s annual agricultural output over three years, but it will be adjusted upwards to 1.25 per cent.

If a state spends less than half of its total national aid envelope on a sector, again there will be a more generous allowance of 1.5 per cent.

Also today the Government will unveil its 15-part Brexit omnibus Bill in preparation for a potential no-deal divorce with contingency measures across health, transport, tax and welfare.

The landmark piece of legislation involved the input of nine Government Ministers and focuses on protecting Irish citizens, supporting businesses and jobs, and securing ongoing access to essential services and products.

Minister for Social Protection Regina Doherty will also bring a series of amendments to ensure that employees of UK companies that enter insolvency will still be entitled to a range of payments, including sick leave or holiday leave.

Yesterday DUP MP Ian Paisley suggested European leaders would soon put pressure on Taoiseach Leo Varadkar and the Government to “move aside” from the Brexit process so the EU and the UK can strike a deal.

The North Antrim MP said he believed EU businesspeople and leaders such as German chancellor Angela Merkel and French president Emmanuel Macron would now be anxious to achieve a deal that is mutually satisfactory to the EU and the UK.

“If I was the German chancellor or the French president I would be saying to Mr Varadkar, ‘Listen mate, you have had enough fun with the politics of this; it is now time to get on with the real deal’,” Mr Paisley told The Irish Times.