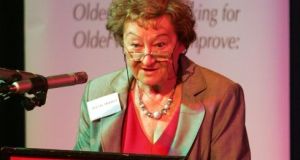 A file image of Sylvia Meehan. A funeral service for her in Dublin was told on Monday of her belief in ‘equality and human rights’. Photograph: The Irish Times

Sylvia Meehan, rights activist and the first chair of the Employment Equality Agency (EEA), “believed in equality and human rights that left nobody behind”, her daughter Rosa has told a service in Dublin celebrating her life.

In the Ireland of the 1970s, his mother was “everything that Ireland was not but she was of an emerging Ireland that she helped shape”, her son Richard said.

President Michael D Higgins and his wife Sabina were among the large gathering who joined Ms Meehan’s family at the humanist service on Monday at Dublin’s Mount Jerome Crematorium.

Ms Meehan died last week aged 89 after a long illness. She was the first chair of the EEA; a former vice-president of the Association of Secondary Teachers of Ireland; a founder member of the Council for the Status of Women; a founder member and former president of the Seniors Citizens Parliament and a member of the boards of Age and Opportunity, Aontas and the Irish Family Planning Association.

For her family, she was a loving and much loved mother and grandmother and was warmly recalled in that role by her daughters Rosa and Sarah, sons John, Niall and Richard and two of her seven grandchildren, Muireann and Patrick.

Rosa recalled “stolen moments” with her mother in their home in Cabinteely and on holiday at Golden’s Cottage, in Wexford.

Richard spoke of a mother who, despite losing her beloved husband Denis in 1969 to cancer, leaving her a widow with five children aged four to 14, was “great fun” and “very unusual” in the Ireland of the 1970s.

Ms Meehan’s son John said the ban on married women working forced his mother from her legal library job in early 1954, she returned to college and began a teaching career in 1968.

She opposed State suppression of civil and human rights. “Unorthodox mother? She was great. Be unorthodox.”

Sarah Meehan, who read the poem Begin by Brendan Kennelly, said her mother had had “more than her fair share of adversity” but the “happy weird times were plentiful”.

“Even though she had the most remarkable public life and had a wonderful positive effect for so many people, she was mammy to five of us.”

Niall Meehan said his mother’s outlook on life was always young and she considered there is “no calendar age when we cease to be citizens”.

To laughter, he said the only skill his mother had not mastered was driving, noting she had terrified a friend when she gave him a lift.

Her eldest granddaughter Muireann said her grandmother was an incredibly important person throughout her life “who made me feel I could do anything” .

After the service, Ms Meehan was buried at Deansgrange Cemetery. Pre-deceased by her husband Denis, she is survived by her sister Rosa, brother Raymond, five children and their partners, seven grandchildren and nephews and nieces.