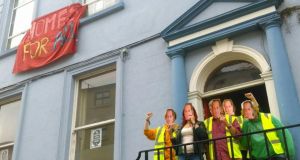 Occupation: protesters at the former presbytery. Photograph: Take Back the City – Waterford/Facebook

Housing activists inspired by protests in Dublin have occupied an empty building in Waterford city centre.

They took over the four-storey former presbytery, on O’Connell Street, on Friday. Activists in Dublin recently occupied buildings on Summerhill Parade and North Frederick Street to protest against the housing crisis.

The Waterford protesters, who are local supporters of the Take Back the City movement, said they want the council to build social housing on land banks around the edge of the city and to compulsorily purchase what they say are thousands of vacant properties in the area. They are also calling for rent caps to be linked to inflation.

A local People Before Profit representative, Una Dunphy, said she supported the protest. Minister for Housing Eoghan Murphy “said Waterford would build 687 new social houses between now and 2021. This is a ridiculously low number, but even so only 11 social houses were built last year. There are over 3,000 on the housing list in Waterford, and there are over 110 people homeless in Waterford at present.”

She told reporters the activists had chosen the former presbytery, which the council leases from the diocese of Waterford and Lismore, because “it’s city centre, it’s huge, it’s an old building with a preservation order on it, and it’s owned by the council. For that reason we feel it’s something they could act on immediately. It’s nobody’s private property. It’s owned by us. When we think of apartments in the city centre – I’ve lived in them myself – they’re tiny little shoeboxes. This is a huge building that has big huge rooms, and it could be a fantastic apartment block.”

After meeting the Waterford protesters, who include housing activists, trade unionists and students, the Garda and council said they could stay in the building until 11.30am on Saturday. They have been told not to go beyond the ground floor, where arts workshops have occasionally been held, because of safety risks on upper floors. A decision on the building’s long-term use is pending.