‘Without a shadow of a doubt in my mind, he is the most suitable and the best candidate’ 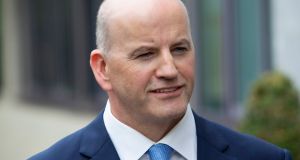 Mr Gallagher secured ten of the 16 votes available. Three councillors voted for Senator Joan Freeman, two voted for journalist Gemma O’Doherty. One councillor abstained and two were absent. Each local authority may only nominate one candidate in the presidential election. A candidate requires the support of four local authorities or 20 members of the Oireachtas to be able to contest the election.

“Without a shadow of a doubt in my mind, he is the most suitable and the best candidate,” he said. He added Mr Gallagher had received the backing of four local authorities in 2011 as well as a “huge” vote, in spite of the tweetgate controversy. His proposal was seconded by independent Cllr Paddy Kilduff.

A supporter of Mr Gallagher during the 2011 election, Mr Ward thanked his colleagues for their support.

“It was good to come in here and see the democratic system working. I am pleased that there is an election. There should always be an election no matter how good the person that’s holding the office is, and no matter what office it is.”

He said the support Mr Gallagher received in the council, which was across party lines, showed what an acceptable candidate he was.

“I certainly will be canvassing for him,” Mr Ward continued. “I contacted Sean Gallagher when there was speculation in the media to see would he run.”

And Mr Ward told Mr Gallagher should he decide to contest the election, he would nominate him.

He described Senator Freeman as a renowned mental health activist and said she would make a very good President. His nomination was seconded by councillor Joe Murphy of Fianna Fáil who praised the inspirational senator.

“She has brought out many hidden secrets that we have in this country,” Mr Byrne told the meeting.