Survival of Stormont at stake in Northern talks – Villiers 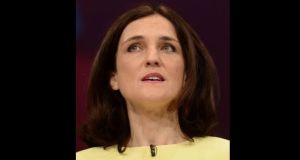 Northern Secretary Theresa Villiers has warned of the possibility of a return to British direct rule if the Stormont House talks fail to reach a successful conclusion.

Survival of devolved government in Northern Ireland is at stake in the talks aimed at resolving the key issues of paramilitarism and the deadlock over welfare reform, Ms Villiers told the British Conservative party conference in Manchester yesterday on Wednesday.

The British and Irish governments and the North’s five main parties have been discussing welfare reform as part of the talks at Stormont House this week.

Ms Villiers in her Manchester speech focussed on the welfare logjam which has resulted in the Northern Executive facing an impending shortfall of £600 million (€800 million) which could leave the Executive financially unsustainable well before the end of this year. Sinn Féin and SDLP opposition to welfare change means that British government welfare plans don’t operate in Northern Ireland.

“Time is short,” said Ms Villiers. “Unlike last year, we simply don’t have the luxury of endless long hours of discussions stretching on and on until Christmas.”

“There’s a real risk that those taking a hard line against welfare reform will end up running the devolved institutions into collapse as collateral damage,” said Ms Villiers.

“A return to direct rule would be a severe setback after everything that’s been achieved over recent years and we are doing all we can to prevent it,” she told the Tory delegates.

Ms Villiers insisted the British government would not provide any extra money to cushion the effects of welfare cuts in the North. “The government will not fund a more generous welfare system in Northern Ireland than it does in the rest of the UK. There is no more money,” she said.

She also repeated her warning that if the Northern politicians did not resolve the welfare issue she would return welfare powers to Westminster.

Ms Villiers also referred to how the murders of Gerard Jock Davison in May and the revenge murder in August of Kevin McGuigan exacerbated the political crisis. “In recent months the fallout from two brutal murders in Belfast has highlighted the continued presence of paramilitary organisations and the involvement of some of their members in criminality and organised crime,” she said.

“Let’s be clear: paramilitary organisations have no place in a democratic society. They were never justified in the past. They are not justified today. And they should disband. So a key aim of the talks is to find a way to bring an end to this continuing blight on Northern Ireland society,” she said.

Mr McGuinness said the welfare cuts the British government was imposing were “staggering” and had worsened since the Conservatives won the British general election. “Sinn Féin will not agree to this ideologically driven austerity agenda,” he said.

Mr McGuinness said that “even against the odds” the current talks could succeed. But that would only happen by the British government recognising it was a “player in these negotiations”.

“They are not some kind of neutral arbitrator. It is their reckless policies of austerity that have provoked the financial crisis facing our institutions. The British government needs to recognise that we, as a society emerging from conflict, do have unique and specific challenges,” he added.

“So far that reality, and the generosity that should accompany it, have been missing on the part of the British government. That needs to change,” said Mr McGuinness.

Meanwhile, the DUP which has withdrawn all but one of its ministers from the Northern Executive to demonstrate that politics can’t continue as normal following the murder of Mr McGuigan and has stated that its ministers “will not be benefiting financially during the period of the resignation”.