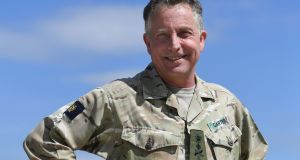 Chief of the Defence Staff Gen Sir Nick Carter talks to the media during a visit to RAF Coningsby in Lincolnshire. Photograph: Joe Giddens/PA Wire

The new chief of British defence staff has been accused of insulting the families of some people killed in the Troubles in saying he will stamp out cases of veteran soldiers being chased by people “making vexatious claims”.

Speaking to reporters at an RAF base in Lincolnshire, General Sir Nick Carter insisted the British army had done “a remarkable job” in the North and that groundless allegations against soldiers risked undermining the army’s fighting spirit.

Members of regular British Army regiments killed 302 people during the Troubles, more than half of whom were civilians, and a number of historic legal actions have been taken over some of these deaths.

“We need to have standards, we need to have values that people are held against otherwise we will lose the moral high ground. What is fundamentally wrong though is if they’re chased by people who are making vexatious claims – and that will not happen on my watch. Absolutely not.”

Linda Dillon MLA, Sinn Féin’s legacy spokeswoman, described the comments as “extremely insulting to families and victims of the conflict” and called on him “to provide evidence of vexatious claims”.

“During the conflict, state forces operated with impunity and we will resist any attempt to legalise this policy, which constituted an integral aspect of the British government’s sustained abuse of the human rights of Irish citizens both during and after the conflict,” she said.

Ms Dillon urged Gen Carter to “acquaint himself with the facts and the best way to do this would be by meeting with the families in order to understand the hurt such claims make”.

Alliance deputy leader Stephen Farry MLA said it was not the job of those tasked with helping to uphold the rule of law to second guess it. He said Gen Carter’s remarks “appear dangerous, irresponsible comments at odds with the rule of law”.

“Gen Sir Nick Carter may well have recognised that current and former soldiers should be held accountable, but it is not tenable for him to make judgements or draw a distinction on what are ‘genuine’ versus ‘vexatious’ claims.”

Mr Farry dismissed the suggestion there is a “witchhunt” against members of the British armed forces.

UUP justice spokesman Doug Beattie MLA, a former British army captain, welcomed the comments, saying the army “did indeed do ‘a remarkable job’ here in defeating a brutal terrorist campaign with great restraint and in the face of massive provocation”.

A Northern Ireland Office consultation on addressing the legacy of the past, which does not include a controversial suggestion favoured by many Tory MPs of a statute of limitations for soldiers, has been seeking submissions since May, and will close on September 10th.

Mr Beattie said if individuals – whether soldiers or civilians – have broken the law, then they should be made amenable to the law. He said Northern Ireland secretary Karen Bradley must ensure that legacy proposals are “balanced, fair equitable and crucially, proportionate” as he believes the current process is imbalanced.

SDLP justice spokeswoman Dolores Kelly MLA said her party was opposed to any attempt by the British government to implement a “statute of limitations” for British soldiers who committed crimes during the Troubles.

“No-one is, or should be, above the law; any person or group who committed crimes should be held accountable, and any attempt to circumvent justice will set a dangerous precedent,” she said.