Resurgence in tourism industry behind decision to restore full 13.5% levy 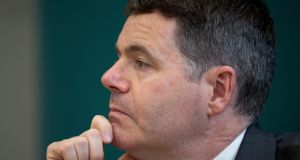 Minister for Finance Paschal Donohoe: A full 4.5% increase in VAT for “tourist accommodation” would bring in €208m, his officials believe. Photograph: Tom Honan

The hotel sector is expected to be singled out by the Government for an increase in the special lower VAT rate as Ministers seek to raise revenue in the budget.

The special 9 per cent VAT rate is anticipated to come to a partial end when Minister for Finance Paschal Donohoe announces his tax and spending package in October.

Under proposals currently being strongly considered by the Government, the full 13.5 per cent rate will only be restored for businesses that sell “accommodation”, such as hotels, guesthouses and bed and breakfasts. The resurgence in the tourism sector, including high prices in many hotels, is expected to be used as a rationale for the change.

The lower rate was introduced during the economic crisis to encourage tourism and to boost the hospitality sector. The cost of the rate since its introduction in 2011 has been €2.7 billion.

The programme for government, agreed between Fine Gael and the Independents, committed to retaining the rate as long as “prices remain competitive”.

The tax strategy papers published by the Department of Finance this week said that while “tourism has grown significantly . . . prices have not remained competitive”.

The papers outlined how much an increase back to 13.5 per cent for each of the sectors currently on 9 per cent would yield the exchequer.

A full 4.5 per cent increase in VAT for “tourist accommodation” would bring in €208 million, Mr Donohoe’s officials estimate. Extending the increase to restaurants would yield another €183 million, but this is seen as a harder political sell given that the main effect of the 9 per cent rate on domestic taxpayers is felt in cafes and restaurants. Restoring it across the board, including to entertainment and newspapers, would bring in €527 million.

The mooted move would mean, for example, that a hotel would levy the 13.5 per cent on its bed stays but only 9 per cent on goods sold in its bars and restaurants.

Potential mitigating measures for those in rural areas, who may not have seen as much increase in activity as others, are a possibility, it is believed.

Mr Donohoe and Fianna Fáil, whose support is needed to pass a budget, have already agreed they will only have €800 million of money for new spending increases and tax cuts.

Similar to last year’s budget, some revenue will have to be raised to bring the overall budget day package to just over €1 billion. The VAT rate, as well as a potential increase in carbon tax, has been earmarked for increases that will help pay for income tax cuts. An increase in betting tax is also being considered.

The Department of Finance also conducted a separate study on the special VAT rate, which was also published this week.

“Positive developments within the 9 per cent sectors suggest that demand and employment are unlikely to be substantially directly affected by an increase,” it says.

The report adds that, as the economy reaches full employment, “continued stimulus” would “likely add to overheating pressures”.

This could include “excess investment in an already-buoyant sector, and a diversion of labour from more productive uses”.