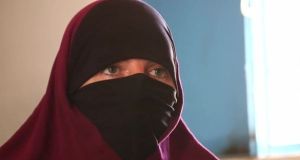 Irish Islamic State supporter Lisa Smith may have blended in with other refugees in north east Syria after fleeing from a detainment camp with her child, aid workers say.

The annex of the Ain Issa camp holding family members of Islamic State fighters was “completely empty” on Monday evening, according to Amjad Yamin of the charity Save The Children, which was working in the camp.

Nearly 1,000 wives and children of the fighters escaped the camp at the weekend after it came under attack from Turkish warplanes. Turkey launched an invasion along its border with Syria following a decision by US president Donald Trump to pull US troops from the region.

The vast majority of those who fled remain unaccounted for. There are reports of large groups of women and children travelling from the camp, including some making their way north towards the Turkish border about 20km away.

A large number of women have also made their way into the main Ain Issa camp, which holds about 13,000 internally displaced persons (IDP) who not affiliated, Mr Yamin said. “They are hiding out here for now.”

There are no restrictions on entering and leaving the main camp which functions as a refugee camp and not a detainment centre. The main facility was not damaged in the recent attack, Mr Yamin said.

An official with the Syrian Democratic Forces (SDF), which had been guarding the detainees, said some women who had escaped with their children later returned to the main camp as they had no food or water. Other’s were recaptured but their location is unknown.

The official said it was extremely difficult to get solid information, as internet and phone services have been down for lengthy periods.

Ms Smith, a former member of the Irish Air Corps, had been in the detainment camp with her two-year-old daughter for the last few weeks, having previously been held in the Al-Hawl camp 220km away.

She had been sharing a tent with the wife and Irish born child of Isis supporter Alexandr Bekmirzaev, a naturalised Irish citizen who was captured by Kurdish forces earlier this year.

Mr Yamin said Ms Smith and her child were not among a group of some 30 people taken by UN workers to the city of Raqqa. All members of this group were unaccompanied children, he said.

“Once again, we urgently call on foreign governments to repatriate their nationals while they can. The opportunity is quickly slipping away,” said Save the Children Syria response director Sonia Khush.

“We heard reports that the authorities on the ground took some of the foreign women to another location, but many have fled and some are unaccounted for.”

Both sides have agreed to join to fight Turkish forces. The deal involves leaving the SDF in charge of detention and refugee camps in north-east Syria, a spokesman for the main governing party in the region said.

There have also been reports of escaped Isis members engaging in gun battles with SDF forces nearby and of the flag of the terror group being flown between the camp and the Turkish border.

Asked about developments at Ain Issa, a spokeswoman for the Department of Foreign Affairs said it would, as in all cases where Irish citizens abroad were in danger, engage with partners and provide consular advice and assistance.

“Given the particularly volatile and complex situation in the region, it would not be appropriate to comment on specific cases or any possible course of action.”

Last week, the gardaí confirmed that both Ms Smith and Mr Bekmirzaev are being investigated under the Criminal Justice (Terrorist Offences) Act 2005, which prohibits membership of domestic and foreign terrorist groups.

During her time with the Air Corps, Ms Smith worked as a flight attendant on the Government jet, and as a driver for senior officers.

Turkey has said its attack on northern Syria, which began last week, is designed to create a safe zone along the border and that its sole target is Kurdish fighters, whom they say are terrorists.

Covid-19: First dose of vaccine given to 1.9% of people in State, Minister says 10:28
Empty shelves in the North are because of Covid, not Brexit, says Lewis 08:30
Regulator receives 81 reports of suspected Covid-19 vaccine side effects 08:25
Storm Christoph: Widespread heavy rain expected with flood risk 08:17
Hospitals in south and southwest getting lion’s share of Covid vaccines 03:00