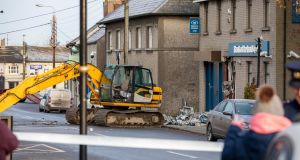 The scene of the ATM robbery in Dunleer, Co Louth. Photograph: Ciara Wilkinson

A bank which had a sum of money stolen in an attempted ATM theft in Co Louth on Saturday morning will open on Monday, Bank of Ireland has said.

The incident happened at on Main Street in Dunleer at around 3.30am.

The street was closed by gardaí for investigation purposes for a number of hours on Saturday but it was also impassable as the digger used to remove the ATM and the surrounding brick wall, and the flatbed trailer used to transport the digger, were both parked across the street. Bank of Ireland carried a full examination of the premises on Saturday and a spokesman said the bank would open on Monday.

Gardaí believe those responsible left the scene in a silver Toyota Land Cruiser with a partial registration of 04-MH heading north of Dunleer and are appealing for anyone with information to come forward.

Main Street is the only street ATM in the town and it is understood that its vulnerability led to it being regularly patrolled by gardaí, including the armed regional support unit in the wake of the other ATM robberies.

It is understood that an armed patrol had checked on it a few hours before this incident. The town is about 15km north of Drogheda and just two minutes from the M1 motorway. There has been a spate of ATM robberies on both sides of the Border this year — 16 ATMs in Northern Ireland and 15 ATMs in the Republic of Ireland.

The remains of the ATM structure were crushed and appeared to be just visible among the rubble.

There are a number of CCTV systems in place on different premises along the Main Street and it is expected that the criminal operation will have been captured.

A number of local businesses were affected by the street’s closure.

Butcher Larry Hand said, “Saturday is the busiest day in the butchers. It is a disgrace, it was sticking out a mile that it would happen, in a little town like this, that is what they are targeting the whole time.”

Residents of a small cul de sac development The Orchard, which is accessed via the Main Street opposite the Bank of Ireland, were unable to drive in or out for hours.

One resident, who works as a carer was due to go to work at 8am but could not get out of the estate. “ I have 16 calls to do today and the office are trying to get someone to cover for me,” she said.

Louth Fianna Fail deputy Declan Breathnach said “a continuation of ATM robberies will deprive our towns and villages of such facilities and is not helping in promoting the Border region.

“Forty years of disrespect for law and order in our communities by a small number of coordinated criminal gangs should not be allowed to disrupt our lives or hamper the economy of local towns.

“There is now a real danger small villages and towns will lose their ATM machines, either through services being withdrawn or further raids due to the increase in criminal activity.”

Gardaí are appealing to any person who was in Dunleer Saturday morning between 3.00am and 4.00am and who saw anything unusual, and to any road users with camera footage, to contact them. They are also appealing to any person who saw any suspicious vehicles in the Dundalk area at this time to contact Drogheda Garda station 041 987 4200, the Garda Confidential line 1800 666 111 or any Garda station.–Additional reporting PA