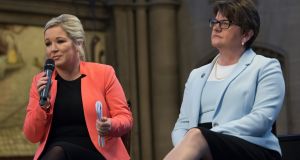 Rather like the Republic’s game against Wales on Monday, the DUP-Sinn Féin negotiations to restore the Northern Executive and Assembly have reached a do-or-die moment.

Apart from the Irish language all other issues are more or less “wrapped up with a neat bow”, according to a number of sources. There is some final work to be done that could take the process into next week but essentially now it’s up to Sinn Féin and the DUP to declare whether the final issue can be resolved. It is win or lose.

In recent weeks commentators have been asking, will they do a deal? A better question is, how could they not do a deal?

If politics is the art of the possible it should not be beyond the competence of such experienced politicians as Sinn Féin president Gerry Adams, DUP leader Arlene Foster, Minister for Foreign Affairs Simon Coveney and Northern Secretary James Brokenshire to finesse the conundrum of the Irish language.

Northern politicians have dealt with far bigger problems over almost 20 years, such as releasing prisoners, policing and justice; so how could they be snookered by differences over an Irish language or more general cultural Act?

Sinn Féin, buoyed on by language enthusiasts such as Conradh na Gaeilge, wants a free-standing Act,while the DUP seeks more broader face-saving legislation that would incorporate Ulster Scots. That is because Foster said in her infamous 2016 “crocodiles” comment about what she saw as the insatiable demands of Sinn Féin that there would never be an Irish language Act.

The challenge for the DUP and Sinn Féin and the Irish and British governments is to devise something that would be seen as “I can’t believe it’s not an Irish language Act”.

That requires some wizardry, but in politics squaring such circles should be perfectly achievable.

The two other stubborn issues blocking an agreement were dealing with the past and same-sex marriage.

On the past there is architecture in place from the Stormont House Agreement of Christmas 2014 to address the matter. The proposals there include an historical investigations unit to investigate cold-case Troubles killings; an independent commission on information retrieval where perpetrators could tell the truth without fear of prosecution; and an oral history archive where victims and other could tell their stories of the conflict.

Moreover, Northern Secretary James Brokenshire has a document of proposals on the past waiting to be put out for public consultation.

Ultimately whether victims get justice and/or truth is another matter entirely. The crash this week of most of the cases that Ulster Volunteer Force supergrass Gary Haggarty was to be involved in against his former associates points to how difficult it will be to bring some comfort to victims.

Yet at least, if the politicians can agree, there would be structures in place where justice and truth could be sought.

Gay marriage was viewed as another intractable problem. Again the sense is that if the Assembly returns, the next attempt to introduce legislation, which would be the sixth vote on the matter, would succeed.

It could be blocked by the Petition of Concern where motions can be vetoed if 30 of the Assembly’s 90 members sign. Yet the DUP has just 28 seats in the Assembly, and is short two votes to reach the 30. Traditional Unionist Voice MLA Jim Allister probably would sign a petition, and thereafter the DUP would require one of the Ulster Unionist Party’s 10 MLAs to sign the petition.

“And that’s just not going to happen,” said a well-placed DUP source. “Can you imagine the torrent of abuse that would rain down on any Ulster Unionist who would do such a thing?”

If this DUP source is correct then the view seems to be that the passage of same-sex legislation already is a fait accompli. But again any deal would need some more specifics on this matter.

A range of other issues are being addressed in the talks such as a bill of rights and creating structures that would make a future Northern Executive and Assembly more sustainable. Everybody needs a break from the stop-start politics of recent years.

Ostensibly, reaching agreement mainly centres on resolving the remaining chief contentious issue, the Irish language question. Unionists have a number of concerns including that the issue could be used to “Gaelicise” Northern Ireland and that legislation in terms of employment would be used to discriminate against non-Irish speakers.

One senior political source told The Irish Times this week that progress had been made on the issue, and that some of the concerns of Conradh na Gaeilge were being met, and that there was potential for compromise.

So we would seem on course for a deal unless a different agenda is being pursued. Sinn Féin’s Northern leader Michelle O’Neill was careful on Thursday evening to caution against assumptions that it is a done deal, stating that “real challenges” needed to be addressed.

So it may take a few more days, and maybe into next week and perhaps a little beyond, before we know for sure if Stormont will be reinstated.

Here too some unionists and others entertain suspicions that Sinn Féin wants to play a longer game: that it has a plan to exploit the Brexit confusion and keep Stormont in cold storage in order to advance its all-Ireland ambitions.

The DUP and Sinn Féin have been maintaining radio silence in terms of their talks but the word is that some degree of trust has built up between the two parties, and that Ms Foster believes that Ms O’Neill and more importantly Mr Adams do want the powersharing institutions functioning again.

And that’s the message the main parties have been getting on the streets. Cuts to health, education and sporting grants are beginning to bite - and this at a time when the DUP is promised an additional £1 billion for such services in order to continue to prop up the British Tory government.

A headline in last Saturday’s Irish News directed at the DUP and Sinn Féin appeared to reflect the unionist-nationalist community mood. “Get it sorted,” it read.