An Post confirms all 122,000 stamps with iconic image are gone and it will print new stock 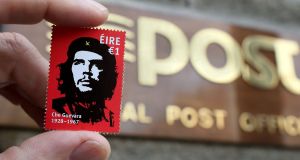 The first print-run of 122,000 postage stamps bearing a famous image of Marxist revolutionary Che Guevara by an Irish artist has sold out, An Post has confirmed.

Many Cuban-Americans recently expressed outrage that the Government had sanctioned a stamp of a man they regard as a mass murderer.

Many Cuban exiles hold him responsible for the execution of hundreds of prisoners after Fidel Castro overturned the Batista government in January 1959.

An Post said on Thursday the initial print-run of 122,000 Che Guevara stamps had sold out.

“It is necessary to now print extra stock to cover our regular stamp customers and makeup of annual collector products, annual stamp yearbook, etc. It is anticipated that some additional stock will then be available for general sale,” it added.

Castro is known as the Butcher of La Cabaña, the prison where the opponents of Fidel Castro’s government were taken after the revolution.

Guevera died 50 years ago this week in an ambush in Bolivia. Jim Fitzpatrick produced the iconic image of Guevera a year after the revolutionary’s death in 1968 from a photograph taken by Alberto Kordo. It became one of the most famous images of the 1960s.

Jim Fitzpatrick, the Irish artist who produced the image, said this week it was an honour to produce the original image and “extraordinary” that An Post had decided to use it on a stamp.

He said his views on Guevera have never changed in the 50 years since his death despite the “black propaganda which is out there about him”.

He maintained Guevera condemned not just United States imperialism but also Soviet imperialism and lost his job as the governor of the Cuban central bank as a result.

“He gave it all up to fight for poor and the dispossessed in the poorest part of Latin America where he had no support. The Communist Party refused to support him.”

Cuban-American journalist Ninoska Perez of Miami 710 Radio called for the stamp to be scrapped.

She said Che Guevara was a mass murderer and should not be commemorated in such a manner.

“I really don’t know what it is that people find that there is to celebrate about the figure of Che Guevara. I would love to see that stamp abolished. What does Ireland think they are doing by putting Che Guevara on a stamp? This is objectionable,” she said on RTÉ’s Morning Ireland this week.

Felix Larkin, chair of An Post’s philatelic advisory committee, said there were two basic criteria which guided the committee in making recommendations for images on stamps.

First, a stamp “should showcase some aspect of Irish life, culture or history, or Ireland’s place in the world”.

“Second, in the interests of heightening international awareness of our small country, both subject and design should appeal to stamp collectors and others worldwide,” Mr Larkin said.

“The proposal for the Che stamp was considered by the committee in 2015, and we recommended its approval on the basis that it would meet both these criteria.”

He noted Che was “a major figure of the twentieth century”.

“He was of part-Irish descent; after his death, he became an icon of youth culture everywhere; a factor in his iconic status was the acclaimed image of him created by the Irish artist, Jim Fitzpatrick, which features on our stamp; and, finally, the stamp represents an outreach to the Irish diaspora of Latin America which is rarely acknowledged by us.

“These are the reasons why our committee considered that the stamp was appropriate.”