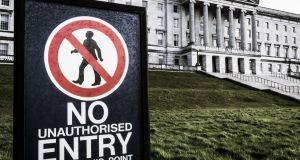 Body will have to operate with a reduced board as a result of the Stormont impasse, it has emerged. Photograph: Getty

The cross-Border body responsible for the promotion of the Irish language throughout the island of Ireland will have to operate with a reduced board as a result of the Stormont impasse, it has emerged.

Replacements for five board members whose terms came to a close this week cannot be made in the absence of the North-South Ministerial Council.

In a statement issued by Foras na Gaeilge it was pointed out that as the northern executive is not currently functioning, “the North-South Ministerial Council cannot meet and interim decisions in relation to the north-south bodies cannot be made”.

Mr Ó Gallchóir said “the work of the Foras na Gaeilge board will continue, although there will be a smaller board, until the two governments find a resolution to this question. We hope this will happen soon in 2020”.

A spokesperson said the reduction in the number of board members will not affect the operational functioning of Foras na Gaeilge.

Foras na Gaeilge forms one part of the Language Body alongside Tha Boord o Ulstèr-Scotch (Ulster-Scots Agency). The Language Body is one of six officially designated North-South implementation bodies set up under the Belfast Agreement.