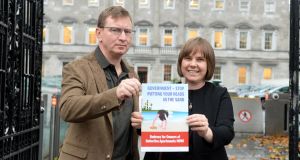 Kath Cottier, a Director of Beacon South Quarter, and Andrew Prior, an owner there, outside Leinster House, as they prepare to set up a lobbying group. Photograph: Dara Mac Dónaill

Politicians will face pressure in next year’s general election campaign to support calls to compensate tens of thousands of apartment owners who face mounting bills to repair building defects.

A lobby group representing owners of homes with building defects has written to all political parties in an effort to secure their backing for a scheme of redress for those affected.

The Construction Defects Alliance estimates that more than 90,000 apartments across the State are affected by defects such as water ingress, insecure balconies and a lack of fire-stopping material.

The group has asked for meetings with representatives from all opposition parties as well as the Minister of State for Housing, Damien English.

The alliance is seeking firm commitments in parties’ manifestos on the implementation of the recommendations of the Oireachtas housing committee’s Safe as Houses report from last year.

The report recommended the establishment of a redress scheme funded by an industry levy, Government funds, tax write-offs or low-interest loans. It also recommended the provision of an information and advice service for those affected by defects. None of those recommendations have been implemented by the Government, which has repeatedly expressed its concerns around exposing the taxpayer to an unquantifiable liability.

However, the alliance is hopeful Mr English might respond to proposals for soft loans and tax breaks that would “help take some of the sting out of the massive remediation costs,” said Kath Cottier, spokeswoman for the group.

Established just over a month ago, the group has gone from having members from 13 different locations to now having members from 61 apartment blocks and housing estates across the country. These owners are from Galway, Limerick, the Midlands, Dublin, Louth and Meath.

Representatives from the Green Party, Sinn Féin, Labour, People Before Profit, Social Democrats, Fianna Fáil and even Fine Gael have indicated varying degrees of support for the group, while the alliance awaits a response from Mr English.

Alongside targeting politicians, the group is also planning a voting registration drive to ensure more apartment owners are involved in the lobbying of their public representatives.

The two-year anniversary of the publication of the Safe as Houses report is on January 24th and to mark the occasion the alliance has planned a “week of action” at the end of January in order to “send a clear message to current and future Oireachtas members that people affected by fire and other defects expect to see action on the proposed redress measures”.