Low tides at Streedagh this weekend may expose more wreckage 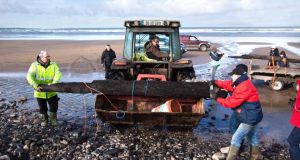 The finds (pictured) follow the discovery last year of part of a 20ft rudder from one of the vessels on the beach. Photograph: Ciaran McHugh Photography

Fears have been expressed for the security of the three Spanish Armada shipwrecks off the coast of Co Sligo, following the discovery of two separate remnants, apparently washed up on Streedagh beach by recent storms.
Donal Gilroy from the Grange and Armada Development Association (GADA) said the discoveries underlined the fragility of the wrecks, described by one expert as “the best archaeological site for this time of maritime archaeology in the world”.
The National Museum and the heritage office at Sligo County Council were notified yesterday about the finds, which follow the discovery last year of part of a 20ft rudder from one of the vessels on the beach.
About 1,100 sailors died when three Spanish galleons were wrecked in violent storms off Streedagh in 1588. An interpretative centre is planned for the nearby village of Grange but there have been calls for the vessels to be excavated and housed in a purpose built local museum.
Mr Gilroy said it was possible that scheduled low tides this weekend may expose more wreckage.
“These have been buried off Streedagh for nearly 430 years. It is lucky they were not carried out by the tide,” he said.
He said that at the request of the county council he was placing the two pieces of wood, one found on Thursday by a member of the GADA, and the other yesterday, in salt water at an undisclosed location to ensure they are properly preserved pending a visit next week by experts from the National Museum.
“One piece is 13 feet long and the other about 16 feet long and they are well preserved oak. They both look like they came from the rib of a boat”, he said.
Thee three wrecks are located about 60 meters from the low tide mark in 15 meters of water.
“This is a protected site but we worry that these boats are being moved by storms. They have thrown up more in the last two years than in the previous 40,” said Mr Gilroy.
He said that there was a fully intact gun carriage and a number of cannons which were taken from the city walls in Palermo, on the vessels at Streedagh.
The Streedagh wrecks were rediscovered in 1985 by a team of divers led by Dr Colin Martin who had who had led previous explorations of Spanish Armada shipwrecks.