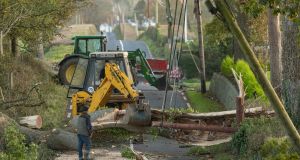 Workmen clear a tree that fell and took out power lines on the R703 between Thomastown and Graiguenamanagh, Co Kilkenny. Photograph: Dylan Vaughan

Thousands of homes and businesses remain without water and electricity on Wednesday as emergency responders battle to continue repairing the damage wreaked by Storm Ophelia.

Although significant progress had been made reinstating power lines and water supplies, it is unclear exactly when such remedial works might be completed.

The prospect of deteriorating weather conditions this weekend could also cause some setbacks with the head of the National Emergency Coordination Group, Seán Hogan, saying teams were determined to complete as much repairs as possible beforehand.

“There is a wet and windy weekend in prospect. We will be guided by Met Éireann’s weather warnings and closer to the time they will decide whether to issue any sort of particular weather warnings,” Mr Hogan said.

“That it might impact on the restoration effort is our concern . . . we are working to try and get as much as we can done before that.”

By Wednesday morning, 130,000 electricity customers were without power, although the numbers has been reduced quickly from a peak of 385,000. In the first 36 hours following the power outages, 70 per cent of households had their power restored.

The roughly 48,000 without water had fallen from a high of 109,000; tankers have been mobilised in counties Kerry and Cork, where customers are worst-affected. About 56,000 customers are at risk, Irish Water said.

ESB Networks warned that fallen power lines continued to pose a threat around the country, while thousands of toppled trees had been pulled from roads, unblocking all national

Eir has said 110,000 customers are still without broadband.

Public transport too is running as normal, including school buses and the Luas service in Dublin which had been brought to a standstill but which returned to service on Tuesday night.

As the country continued to come to terms with what was pitched as Ireland’s worst storm in more than 50 years, Taoiseach Leo Varadkar said he would consider making it a criminal offence to ignore severe weather warnings as some people – such as those who went swimming in Salthill, Galway – did on Monday.

“I think it is something that merits consideration,” he said during a visit to watch ESB crew repair power lines on the Meath-Kildare border on Tuesday evening.

“People who disobeyed the red alert and travel warnings yesterday didn’t just put themselves at risk, they also put at risk the lives of other people, particularly our emergency services. But I would never rush into creating a new crime. I think it is something that we will have to consider.”

Mr Varadkar said the cost of the clean-up and repairs will not be enough to qualify for financial assistance from the European Union, and may not be as high as had been initially feared.

“The view is that we almost certainly don’t meet the threshold for EU solidarity funding,” he said, adding there was no estimation yet as to the final cost of the storms.

Insurance Ireland had also said it was too early to estimate the extent of losses or claims.

“Obviously when it comes to the ESB, they have extensive resources they can draw on,” Mr Varadkar said. “Local authorities will need further assistance and they will get additional funds for the clean-up and, over the coming weeks, they will assess the damage.”

In previous major weather events, repair costs were heightened by damage to roads in particular, a factor not thought to have reached any significant level during Storm Ophelia, the Taoiseach said.

The Cabinet discussed the fallout from the storm for an hour at its meeting on Tuesday. Ministers agreed that further support would be made available to local authorities to deal with the costs of the clean-up operation. However, there is no indication of the total costs of the operation at this stage, the meeting heard.