Former US president Bill Clinton was conferred with an honorary doctorate from DCU for his contribution to peace and reconciliation on the island of Ireland. Video: DCU 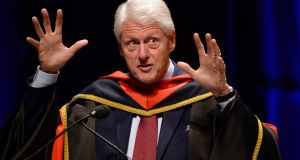 Bill Clinton speaking at DCU, where he was conferred with an honorary doctorate. Photograph: Dara Mac Dónaill 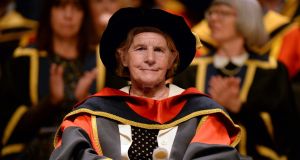 Sr Stanislaus Kennedy, who was conferred with an honorary doctorate at DCU. Photograph: Dara Mac Dónaill 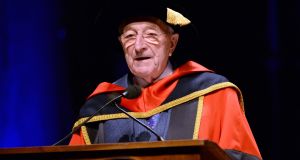 Martin Naughton, who was conferred with an honorary doctorate at DCU. Photograph: Dara Mac Dónaill

Bill Clinton has warned that the rise of nationalism and tribalism across the world threatens to undo achievements such as the Belfast Agreement.

The former US president was speaking in Dublin City University, where he, along with social activist Sr Stanislaus Kennedy and businessman and philanthropist Martin Naughton, was conferred with an honorary doctorate.

Referring to the British vote in favour of Brexit, along with recent elections in France, Germany, the Netherlands and Austria, Mr Clinton said each one represented a reaction against diversity.

“The world again is awash with the very thing we were trying to get around in the Good Friday accord,” Mr Clinton told the invited audience, which included former president Mary McAleese and former taoiseach Bertie Ahern. “In every place there was a nationalist party which said that others are dragging us down.”

Mr Clinton believed the world was now in a conflict between those who wanted to stop “mingling with others at the tribal level” and those who believed diverse communities made better decisions and created more wealth.

“Given the economic inequalities and the rapid pace of social change, all the upheaval, all that’s going on all over the world and here in Europe, people are reassessing whether what we have in common is more important than our differences,” he said . “That’s really what the Brexit vote is all about.”

Mr Clinton said he was receiving the degree because he had done “whatever I could” to make peace happen in Northern Ireland. The Belfast Agreement in 1997, which was the key element of the Northern Ireland peace process, had recognised that in an interdependent world the great trick was to own your own identity but also to form a community “in which what you have in common with those you can’t get away from is more important than your differences”.

The agreement had been reached because people had chosen democracy, which was not just about majority rule, Mr Clinton said. “It’s minority rights and individual rights and the rule of law and the absence of violence as a tool of political advancement,” he said. “Shared decision-making, shared economic benefit and special ties to the Republic of Ireland as well as to the United Kingdom. There had never been any peace agreement exactly like [it] before. It broke like a thundercloud across the world.”

He had used it shamelessly everywhere he went around the world, he said, to show that “if they could pull this off after all these decades” maybe others could do it too.

Now, he said, everybody wanted to contest this. “Alas, here we are back in the soup all over the world, fighting the same old battles we’ve been fighting every since people came out of the caves. Pope Francis said we should live in a culture of encounter. Not that we should agree with each other all the time. Not that everybody should be right all the time. That’s really what the Good Friday accord did.”

Mr Clinton criticised the mentality that led to Brexit, which had left people taken aback when the economic complexities of issues such as a customs union only became apparent to them after they voted.

“If we approached family in the way we approached this debate all over the world, people would run fleeing from their homes the moment parents gave an instruction they didn’t like,” he said. “All partnerships that are community-based are held together not because everybody agrees with everybody else but because co-operation is better than conflict.”

Mr Clinton made no direct reference to the policies of the Trump administration, although he did criticise what he said were attempts in the US to “disenfranchise” some voters.

He also said it was important to know the second verse of Danny Boy “because it reminds you that you can be very big, very famous, very rich, very powerful, very able to push other people around, to hold them down, to lift them up. But what you have left is wondering if anyone will ever say ‘I love you’.”