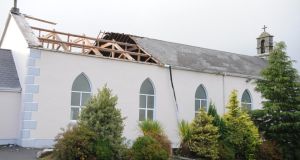 Part of the roof of Kilcorney church in north Cork blown off during Storm Ophelia. Photograph: John Tarrant

A priest and community in northwest Cork who lost much of the roof of their church in Monday’s storm have said that they will repair the damage.

Storm Ophelia hit St Nicholas’ Church in the village of Kilcorney, near Millstreet, between 1pm and 2pm, lifting off a third of the roof in seconds. There were no injuries.

On Tuesday a local contractor was erecting scaffolding.

The plan is to seal the ceiling to prevent further damage to the church, which dates to 1858.

Church insurance is likely to cover the damage, a spokesman for the Diocese of Cloyne said.

Rev William Winter, parish priest of Banteer (Clonmeen) said the community will not migrate to sister churches, St Joseph’s in Lyre and St Fursey’s in Banteer. “We won’t allow the storm to stop us,” Rev Winter said. He felt very anxious to keep church life in the community going, he added.

The church and school are central to community life in Kilcorney, according to locals. Sunday and other masses are to be held in the village hall so that parish life can continue until their church is repaired.

Meanwhile, at the extreme western edge of the Beara peninsula, St Fachtna’s Church in Adrigole in west Cork, in the Diocese of Kerry, was also struck by Ophelia, and it too sustained roof damage.

That damage was being assessed and was likely to be repaired next week, a spokeswoman for the Diocese of Kerry said. It was not as serious as that sustained in Kilcroney in neighbouring Cloyne.