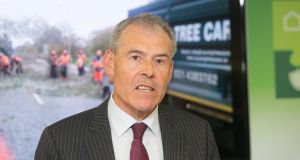 Irish Water managing director Jerry Grant at the National Emergency Co-ordination Centre on Tuesday: he acknowledged there was “a very significant water deficit across the south of the country”. Photograph: Gareth Chaney Collins

A total of 66,000 households and businesses were without water late on Tuesday as Irish Water and ESB Networks worked to restore supplies disrupted due to power cuts caused by Storm Ophelia.

Disruptions to water supply were due to loss of power to treatment plants and pumping stations. Burst pipelines , which could not be repaired until conditions were safe for crews, also affected supplies, as did direct damage to facilities, Irish Water said.

Most difficulties were in a large area stretching from Co Cork to Co Wexford. At one point early on Tuesday a total of 109,000 customers were without supply.

The worst affected areas were Cobh, Youghal, Fermoy, Skibbereen, Wexford town, Kilkenny city, Enniscorthy, New Ross, Castlecomer and Bennetsbridge. Water tankers were deployed in these areas where there was a need for drinking water.

An additional 100,000 customers were at risk of losing supply from reservoirs which experienced power cuts and water reserves were declining, Irish Water said, but that number had been reduced from 260,000 early on Tuesday.

About 30 wastewater treatment plants and sewage pumping stations were without power. At these facilities, “power failure is resulting in discharge of untreated or partially treated wastewater to receiving waters,” an Irish Water spokeswoman confirmed. The most serious discharge problems arose in Nenagh, Co Tipperary, and Glanmire, Co Cork.

The focus was to get those plants fully operational as soon as possible due to the risk that the safety of drinking water would be compromised. “Where risk arises, working with the HSE, Irish Water will impose precautionary boil-water notices as necessary,” she added.

Irish Water managing director Jerry Grant acknowledged there was “a very significant water deficit across the south of the country” but was hopeful that “between the restoration of power by ESB and the deployment of generators that we will be getting a significant proportion of those back in service by night time.”

The ESB said: “restoring power to essential services such as water pumping and sewage facilities, medical facilities and customers with medical needs are a priority”. ESB Networks worked on several of the larger schemes after the storm began to subside on Monday night.

“We are confident that these numbers will be significantly reduced in the coming hours,” the Irish Water spokeswoman said.

To meet the demands of those plants without power, Irish Water put 16 generators in place at drinking water plants. A further 23 generators were en route to assist to restore supplies to 64,000 in the worst affected areas.

Irish Water said it was co-ordinating the deployment of up to 30 water tankers to the affected areas and working with local authorities to ensure more are available if needed. They were also providing information to communities affected and contacting vulnerable customers who need support.

Irish Water’s crisis management team, which was mobilised over the weekend, is overseeing the restoration of water to customers and wastewater centres.