Official guidance indicates tuition may be prioritised over extra-curricular activities 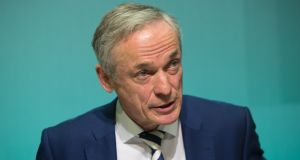 Schools are unlikely to be required to cut short their holidays to make up for lost time as a result of closures linked to Storm Ophelia, according to senior sources.

Minister for Education Richard Bruton has said the Department of Education will “take stock” and issue guidance after consultation with school management bodies.

However, sources who will be involved in these discussions say it is highly unlikely schools will be required to open for extra days due to provisions set out in an official circular which offers guidance on unforeseen school closures.

This states that school management bodies should assess whether schools can complete the curriculum before the end of the academic year.

It advises that shortfalls can be made up by prioritising tuition over other non-tuition activities, reducing the length of mock exams or ensuring State exam year classes attend all classes to the end of May.

If these options are not sufficient, school authorities may then consider cutting short the February mid-term break or the Easter holidays.

Well-placed sources said two days will be easily made up over the course of the academic year, while cutting short holidays would cause disruption to holiday plans for teachers, parents and students.

The vast majority of schools, meanwhile, are due to reopen on Wednesday, although some may remain closed where power and water services have yet to be restored.

A Department of Education spokeswoman said schools were expected to open where possible, based on the individual circumstances of each school.

The department also defended its decision to close all schools for a second day in the face of criticism from some parents.

The spokeswoman said: “This was not a decision that was taken lightly as it is recognised that the decision to close schools has a major impact on families and on the workforce.

“However, the decision was made in the interests of the safety of children and to provide clarity for everyone concerned.”

Some parents in areas that escaped relatively lightly from the storm criticised the move on social media and questioned why individual schools were not given the authority to decide whether to open.

It is understood that allowing schools to decide whether to open on an individual basis was ruled out, partly on the basis that principals would have been required to check for damage to schools on Monday night.

This would have contravened Met Éireann’s advice, given a status red warning was in place until after midnight, to people to stay indoors.

School management bodies and unions said the department made the right decision to issue a blanket closure notice.

“We absolutely support the department’s decision to close for a second day. It gives people a chance to assess any damage to schools. It was an entirely prudent and practical decision which we support,” said Séamus Mulconry, the association’s general secretary.

“There are 550,000 children in the primary school system alone. The southern and western seaboard, in particular, got a battering. There wasn’t time to check if they had electricity, running water or whether schools were structurally safe.”

The country’s biggest teachers’ union, the Irish National Teachers’ Organisation (INTO), also threw its weight behind the decision.

“The department made absolutely the right call. They had to take into account the safety of principals and teachers who would have been required to check last night if schools were able to open today,” said Peter Mullan of the INTO.

“Many schools are finding today that they have no electricity or running water, or that debris on the roads is making access difficult.”

The Association of Community and Comprehensive Schools also said it was the right call.

“The only way to determine whether schools are safe is to carry out a risk assessment. You don’t want to do that with 500 or 1,000 students in the building,”said Áine O’Sullivan, the association’s assistant general secretary.

“It was the only call the department could make in the circumstances.”

“We very much accept that a call was needed at national level in the interests of overall public safety, ” said John Curtis, the body’s general secretary.

Clive Byrne of the National Association of Principals and Deputy Principals said the department’s decision was prudent and appropriate.

Schools that have been damaged, meanwhile, have been urged to contact the department’s emergency works section, which provides funding for unforeseen emergencies.