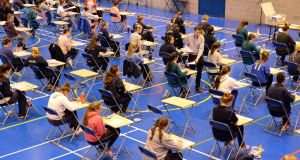 Leaving Cert students will have to wait a week after receiving their official calculated grades before they get to see their teachers’ estimated marks. Photograph: Eric Luke

Leaving Cert students will have to wait a week after receiving their official calculated grades before they get to see their teachers’ estimated marks, the Department of Education has confirmed.

This means thousands of students will not immediately get to see the extent to which their grades have been adjusted by standardisation measures which have proved highly controversial in the United Kingdom.

There was uproar among UK students over recent days after it emerged that almost 40 per cent of results were downgraded by an algorithm.

Northern Ireland, England, Scotland and Wales have since abandoned this standardisation process and opted to rely solely on teachers’ estimated grades.

In response to queries from the The Irish Times, the department said all Leaving Cert students will get to see their school’s estimated mark in each subject and their class ranking on September 14th – one week after their calculated grades are released on September 7th.

However, the Irish Second Level Students’ Union said all information relating to students’ grades should be made available to Leaving Cert candidates as quickly as possible in the interests of fairness.

“We want to ensure students have enough time to fully evaluate their position and for college applicants to decide if they want to accept their first round CAO offer,” said ISSU president Reuben Murray.

“The deadline for students to accept round one CAO offers [September 16th] is just two days after they get to see their school’s estimated grade – that is a very short period of time.”

In the UK, most students had access to their calculated grades and teachers’ estimated grades on the same day and were able to see the extent to which their grades were adjusted.

A department spokeswoman said the appeals system for students will open on September 14th and all students will have access to their estimated grades and class ranking submitted by their school on this date.

Minister for Education Norma Foley has said her department will not publish its standardisation formula until after the process is completed.

However, her officials say the Irish system differs from the UK by giving a greater weighting to percentage marks issued by schools.

Department guidance documents state that grades are likely to be adjusted in many cases.

“We expect that many estimated marks may change, to at least some degree. Although some will change more than others depending on the quality of the data we receive from schools,” the documents state.

They add that the rank ordering of students by the school in their class grouping will be retained in the process, so students will keep their position relative to each other.

Last June, teachers were asked to provide an estimated percentage mark for each Leaving Cert student for each subject. Students were also put in a rank order in their class.

Schools were also asked to align this data before it was signed off and passed on to the department, where it has gone through a standardisation process.

The process is aimed at ensuring schools have not been too harsh or too lenient when giving estimated scores for students, and to ensure they are broadly in line with results from previous years, according to the department.