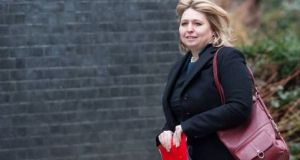 Northern Secretary Karen Bradley: has ran a consultation on addressing the legacy of the North’s past

All investigations into unsolved killings during the Troubles should be stopped and the money saved spent on victims and survivors, some of the UK’s senior retired politicians have urged.

The intervention, which comes in the wake of a number of arrests of retired British soldiers in connection with killings during the 1970s, is set to be highly controversial.

The letter calling for the ending of investigations has been signed by four former Northern Ireland secretaries, Labour’s Peter Hain, John Reid and Paul Murphy, and the Conservatives’ Tom King.

In addition, it is supported by Chris Patten, who oversaw the creation of the Police Service of Northern Ireland (PSNI), and former Church of Ireland archbishop Robin Eames.

The eight members of the House of Lords made their comments in a submission to Northern Secretary Karen Bradley’s consultation on addressing the legacy of the North’s past.

The time for receipt of contributions “to find the best way to meet the needs of victims and survivors and to help people address the impact of the Troubles” finished last week. Ms Bradley is due to produce proposals within three months.

Calling for an end to investigations, the House of Lords group argued that the £150 million such inquiries would cost would be better used to help victims and survivors.

“In the light of what is so likely to be a largely frustrating outcome from further police investigations, we believe it may be a much more effective way of helping victims to use that money,” they said.

Dr Eames produced the Consultative Group on the Past report in 2009, along with former vice-chairman of the North’s Policing Board Denis Bradley.

It was sharply criticised for recommending that relatives of all the Troubles’ dead from January 1966, should receive a one-off ex-gratia recognition payment of £12,000, including paramilitaries. It was never implemented.

Now the archbishop and the senior ex-ministers strongly argue that the priority is to help victims, not fund investigations that have “little or no likelihood of either prosecution or alternative closure satisfactory to victims”.

In a three-page submission they argue that experience already shows that there is little prospect of successful prosecutions arising from investigations by the proposed Historical Investigations Unit (HIU).

Its predecessor, the Historical Enquiries Team, investigated 1,615 cases involving more than 2,000 Troubles deaths, yet “only 17 were referred to the public prosecution service, and only three resulted in prosecutions for murder”.

The proposed HIU would have 1,700 killings to investigate. “No one can be certain how many prosecutions and convictions will follow from the work...which is planned to take five years,” they added.

However, it is highly likely that the number of successful prosecutions that will follow will be very small. “It must be worth at least pausing to consider whether this is the best possible use of £150 million.”

Prosecutions against former British soldiers are currently being considered, they said, “perhaps because records and information are more readily available – but none so far as we can establish for paramilitaries”.

“That cannot be right,” they said. “We believe it is essential to treat past cases in an absolutely evenhanded manner. That also means former military personnel cannot be exempt – as some are suggesting – while other former combatants, either loyalist or republican, are pursued.”