Steps to referendums on Irish unity accelerated by Brexit – report 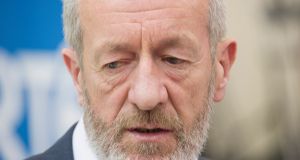 Seán Kelly, MEP: ‘Brexit changed the attitude and culture in Ireland around the issue. People are now talking about a united Ireland that were never considering it five years ago.’ Photograph: Daragh Mc Sweeney/Provision

“The trajectory to referendums [on Irish unity] has been accelerated by Brexit, ” Prof Colin Harvey said at the launch of a paper on the potential EU role in achieving Irish unity.

That inevitability of referendums means “planning and preparation needs to commence and the EU will be a central part of that,” he said.

Prof Harvey, a lecturer in law at Queen’s University Belfast, was speaking with co-author, barrister Mark Bassett, at the launch of the report, The EU and Irish Unity, in the European Parliament on Wednesday night.

The report was commissioned by Sinn Féin and its parliamentary group, the left wing Gue/NGL.

Prof Harvey said that meetings with representatives from the embassies of member-states reflected a broad understanding of the case being made that Irish unity is the best response to mitigate the effects of Brexit, “the forced removal of Northern Ireland from the EU against its will.”

Crucially, Prof Harvey said, the path to unity was already clearly enshrined legally in the Belfast Agreement, the EU, and the Irish Constitution. It would not be necessary to invent a process, and the EU had already accepted that Irish unity would be seen, like German unification, in the context of the expansion of an existing territory rather than a new accession requiring its own accession process.

Commenting on the debate about a hard and soft border on the island of Ireland, Andros Kyprianou, the General Secretary of the left-wing Cyprus party AKEL, said that the green line regime in Cyprus, which allows free access by northerners from the Turkish enclave to the Republic of Cyprus and hence the EU single market, should be examined as a model for a potential soft border in Ireland.

To those like the Irish Government who say it is the wrong time to have the discussion about unity, Prof Harvey replies simply: “Tough! We’re having the conversation anyway. We’re trying to start tonight to have a conversation about referendums that are coming.”

Fine Gael MEP Seán Kelly told the meeting that although he was not advocating an immediate referendum on unity, “Brexit changed the attitude and culture in Ireland around the issue. People are now talking about a united Ireland that were never considering it five years ago.”

Sinn Féin MEP Matt Carthy said the party was not arguing for a referendum today or even necessarily next year, but there was a need now to start planning for it.