‘To lose the curlew would be like losing a big part of Ireland - like our music, our landscape or identity’ 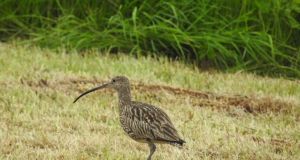 The National Parks and Wildlife Service spearheads a conservation programme aimed at saving the curlew which was once amongst the most common birds in Ireland. Photograph: Joe Shannon

The cry of the curlew could soon be a distant memory for Irish people and as the species continues its precipitous decline its disappearance from the local ecosystem has been compared with the loss of “our music, our landscape or identity”.

A stark warning about the bird’s ’s future has come from Dr Barry O’Donoghue of the National Parks and Wildlife Service (NPWS) who spearheads a conservation programme aimed at saving the curlew which was once amongst the most common birds in Ireland.

The population here has declined by 97 per cent since the 1980s, according to a recent national study into our native species and it is estimated that just 128 breeding pairs now remain.

The survival of the ground nesting species is by no means certain as it faces threats including a loss of suitable habitat.

Launching a programme aimed at preventing the extinction of the curlew, Dr O’Donoghue said “the beautiful bubbling call of the curlew has always been a soundtrack to the Irish summer.”

He said that sound has “sadly fallen silent across much of the countryside. To lose the curlew would be like losing a big part of Ireland - like our music, our landscape or identity.”

Speaking ahead of World Curlew Day on Sunday, he said the NPWS has been working closely with landowners and local communities to help the last remaining curlews rear their young.

Members of the public have also been asked to help by being alert to the sound and sightings of the curlew and reporting positive observations to the organisation.

The Minister for Culture, Heritage and the Gaeltacht, Josepha Madigan said the Curlew Conservation Programme involved “a significant regional effort in the field - to find and secure curlew nests, protect them from predators and monitor the outcomes”.

She described the curlew as “one of Ireland’s best known and most loved birds” and said it was “widely referenced in our rich literary heritage and Irish artists have drawn much inspiration from its very distinctive call down through the years.”