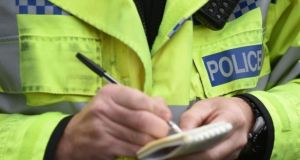 Police have appealed for witnesses to come forward after a 15-year-old girl was stabbed in the neck in Lurgan, Co Armagh at the weekend.

A 14-year-old girl has been charged with grievous bodily harm following the incident which happened in the Dean’s Walk area of the town before 9pm on Friday. The girl is due to appear in court in Lisburn on Monday.

The Northern Ireland Ambulance Service said the teenager treated the victim of the alleged attack at the scene on Friday night. She was taken to Craigavon Area Hospital but later transferred to the Royal Victoria Hospital in Belfast where her condition initially was said to be critical.

On Sunday a spokesman for the hospital said the teenager’s condition had improved to “stable”.

The PSNI urged anyone who witnessed the attack or who had any relevant information to bring it forward to them.

Liam Mackle, a Sinn Féin councillor from Lurgan, said he was shocked by the stabbing, as was the local community.

“This type of violence is just not usual at all. We are used to some levels of anti-social behaviour among young people but stabbings is crazy,” he said. “If anyone has information they should bring it to the police so that they can piece together what happened and get to the bottom of it.”

Local DUP Assembly member Carla Lockhart said her thoughts and prayers were with the injured girl and her family whom she knew.