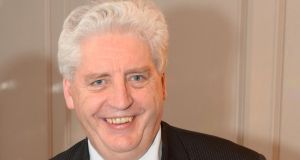 SDLP leader Alasdair McDonnell is accused by his Sinn Féin adversary of being “one of the worst attendees at Westminster”. Photograph: The Irish Times

Outgoing MP Dr Alasdair McDonnell of the SDLP could be in trouble in South Belfast in next week’s Westminster general election. And if he loses he could also lose the leadership of his party.

Chatting to him in the lovely old Victorian Hatfield Bar on the Ormeau Road as he takes a break from canvassing, the inevitable question is: does he not now regret rejecting Sinn Féin’s offer of a pact to match the DUP-Ulster Unionist Party accord?

The Ulster Unionists gave the DUP a free run in East Belfast and North Belfast, with the DUP reciprocating in Fermanagh South Tyrone and Newry and Armagh.

Martin McGuinness pushed for a Sinn Féin-SDLP deal that would have included South Belfast and would have ensured McDonnell being returned to the House of Commons. McDonnell rebuffed the offer and now he’s in a scrap where he could be beaten by DUP junior minister Jonathan Bell or one of three other candidates.

His nemesis could be former Sinn Féin lord mayor of Belfast Máirtín Ó Muilleoir, who in last year’s local elections topped the poll in the ward that takes in the upper middle-class Malone Road area – a Sinn Féin first.

Two more contrasting personas you could hardly meet. Ó Muilleoir, a 56-year-old businessman as well as politician, is smooth and polished, good at promoting himself and his party, his outreach across the community divide as lord mayor embellishing his image. The 65-year-old McDonnell, as he will admit, can be a bit of bit of a bull in a china shop, liable to lose his rag if camera lights are blinding him when delivering a speech, as happened in his first party conference as leader. 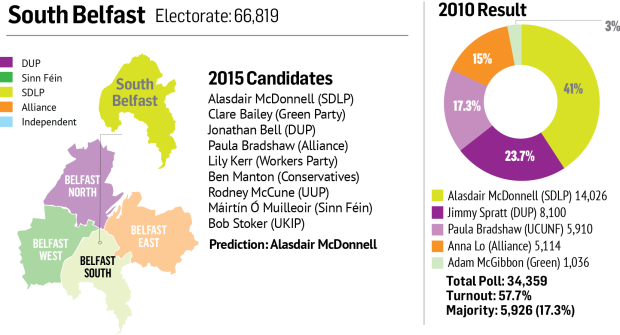 “I will top the nationalist poll,” predicts Ó Muilleoir. “The only question is will I get the seat, and I am confident that it is within our grasp as well. The trajectory is all in our direction.”

He says he is fighting a relentlessly positive campaign although he saves a little bit of negativity for McDonnell. He says he has faced a little criticism on some of the “salubrious” streets of South Belfast for Sinn Féin’s Westminster abstentionist policy, but believes the issue isn’t that “potent” when McDonnell has two jobs (Assembly member and MP) and is “one of the worst attendees at Westminster”.

McDonnell says he meets his various responsibilities, whether as party leader, Assembly member or MP. He is less than kind about Ó Muilleoir’s ability for self-advertisement: “With Máirtín, people see a lot of selfies but very little substance.”

But wouldn’t a pact with Sinn Féin have made life a lot less fraught for him? “A tribal pact does nothing for reconciliation in our society,” he says. “We move forward or we move back, and tribal pacts are the way backwards.”

South Belfast is the seat the DUP has been keeping under the radar but believes it can win as McDonnell and Ó Muilleoir battle it out. There is concern, however, that the controversy over Jim Wells, the DUP minister forced to announce his resignation last week for comments about gays, might turn off some centrist unionists.

Regardless, Bell believes the seat is still eminently winnable and the figures give him a strong chance.

At the last general election in 2010 McDonnell had a 6,000 majority but Sinn Féin wasn’t in the ring. In the Assembly elections in 2011, the DUP topped the poll with 7,845 votes, closely followed by the SDLP with 7,718, Alliance with 6,390, the Ulster Unionists 4,382 and Sinn Féin on 4,038. The figures were almost replicated in the local government elections at the same time.

In the supercouncil elections last year the DUP (7,120 votes) extended its lead over the SDLP (6,332) with Alliance in second place (6,341), Sinn Féin on 4,291 and the Ulster Unionists on 3,390. The upshot is a battle in which all five main parties can claim to have a chance of winning, with Paula Bradshaw of Alliance and Jonathan Bell appearing to be the biggest challenger to McDonnell, although Rodney McCune of the UUP also believes he has a chance.

Also competing are Ukip’s Bob Stoker, Claire Bailey of the Greens, Lily Kerr for the Workers’ Party and Ben Manton of the Conservatives.

Ó Muilleoir has a couple of thousand votes to make up to get close to McDonnell, which seems a tall order, but he could do well enough to fatally wound the SDLP leader and give Bell the advantage. If that happened, not only would South Belfast have a new MP but the SDLP would be likely to get a new leader.

Predicting who will come through is a very hard call. McDonnell, however, has been contesting elections since he first fought Ian Paisley as a 19-year-old in North Antrim in 1970. His position as the sitting MP and his pugnacious ability to slug it out to the last just might allow him to be still standing when the votes are counted next Friday morning.