Snapshot of Ireland a century ago: an online photographic archive 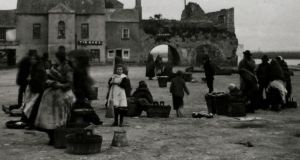 Rare old times: a girl stares into the camera at the fish market by Spanish Arch in Galway in the 1890s. Photograph: Getty

A series of digitally restored black-and-white photographs dating as far back as the Land War of the late 1800s has been released online by the Ancestry family-history website.

The historical prints and photographs, which include more than 120 images taken in Ireland, offer an insight into daily life in Irish cities, towns, villages and countryside between the late 1800s and the 1950s.

The collection is part of Ancestry’s UK Historical Photographs and Prints 1704-1989 set, which features more than 40,000 photographs. It is drawn largely from the Hulton archive of images from Picture Post, the British photojournalism magazine, which are now owned by the Getty Images photo agency. The oldest, from 1855, shows a British soldier as he leaves for war.

Among the Irish photographs are some striking images taken in 1915, after the sinking of Lusitania, the Cunard liner sunk by a German submarine less than 20km south of Kinsale, in Co Cork, with the loss of more than 1,000 lives. The collection also includes images of Dublin immediately after the Easter Rising of 1916. 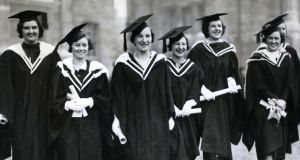 Gallery: Snapshot of Ireland a century ago

A photograph taken in Gweedore, Co Donegal, in 1900 shows a large family, some barefoot, standing outside their thatched cottage. An image from the 1890s shows a girl staring into the camera at the fish market by Spanish Arch in Galway.

Later images show women and children dressed in white for May Day celebrations in 1936, residents of Killorglin in 1951 hoisting a goat on to a scaffold for Puck Fair and graduates from Trinity College Dublin in 1935.

One of the oldest images, an engraving from 1864, shows the attempted shooting of Lord Leitrim as he travelled through Co Donegal.

“Our aim is to provide a snapshot of life through the ages as well as providing our users with the tools to trace and discover their ancestors going back hundreds of years, both at the important cultural times in history but also the everyday moments that make everyone’s family story special,” said Russell James of Ancestry.

The full collection of photographs and prints is available to view online at ancestry.co.uk, and will be available without charge over Easter weekend.

Snapshot of Ireland a century ago

Photographs from the Picture Post archive, restored by Getty and Ancestry.com