Skipper’s ‘terrifying experience’ of being towed by submarine 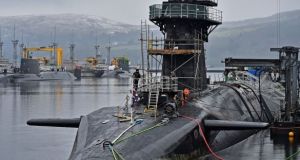 The Royal navy submarine was involved in a collision with Northern Ireland fishing vessel the Karen. File photograph: Getty Images

The skipper of a fishing trawler has recalled a “terrifying experience” in which his boat was towed at speed through the Irish Sea by a Royal Navy submarine.

A marine investigation found the lives of crew members were endangered in the April 2015 incident in which the ‘Karen’ was trailed backwards at seven knots (13km/h) after the submarine snagged in its nets 24km from the port of Ardglass.

Commanders were unaware of the collision until three hours later with the crew failing to realise they were passing beneath a fishing vessel with nets rather than a merchant cargo or passenger ship, noted the Marine Accident Investigation Branch report.

Paul Murphy, skipper of the Karen, said his memory of the incident were “very vivid”.

“It was a terrifying experience,” he told RTÉ Morning Ireland.

“It was just a normal fishing day for us, the fishing was good, at about 3pm we pointed the boat towards home and we were violently stopped in the water. I actually thought we’d caught our nets in the sea bed.

“When I realised the boat was taking off the stern very quickly I knew straight away it had to be a submarine - adrenaline kicked in, made a decision to cut our fishing gear away, but that had a bit of a disastrous effect too as one of our wires, had caught on the winch and we made situation worse as it was pulling on one side of the boat, near capsized us. Fortunately the wires broke and we escaped but during the incident it was sheer terror.”

Mr Murphy added: “Since I went back to work I’m very nervous, I’m not fishing the way I should be fishing. Not spending the time at sea that I should.

“You get to the point where you can only take so much. It’s really affected my career. The way this report has come out and the navy response has made me think I might want to think of employment somewhere else.”

Steve Clinch, chief inspector of marine accidents, said in the investigation report that “the actions of the command team of a royal navy submarine placed the lives of the crew of the trawler Karen in danger”.

“Regrettably, the reluctance of the royal navy to fully engage in the subsequent investigation resulted in this report taking significantly longer to deliver than would normally be the case.”

Mr Clinch said the incident happened because “of insufficient passage planning by the submarine’s command team and their failure to follow guidance on fishing vessel avoidance.

“Had its trawl warps not parted, it is almost inevitable that Karen would have capsized and sunk; the collision also presented a very significant risk to the submarine.”

Part of the prawn trawler’s deck had to be lifted and another section was ripped off but the four crew escaped unharmed.

Mr Clinch said lessons learned after the sinking of a trawler in 1990 had been lost. “As a result, it is now important that the royal navy reviews its procedures and training for the safe conduct of dived submarine operations in the same vicinity as vessels engaged in fishing.

“By its actions, the royal navy also needs to rebuild trust with the fishing industry.”

Mr Murphy said the report had been a long time coming and he also criticised a “lack of transparency from the Royal Navy” which he said held the report back from what it should be.

“They don’t want to be doing this every day. I actually thought they’d want to find solutions to the problem that they obviously have.”