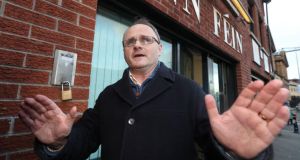 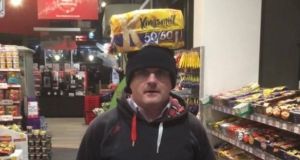 Sinn Féin MP Barry McElduff posted a video on social media on the anniversary of the Kingsmill massacre.

The decision by Sinn Féin to impose a three-month suspension on West Tyrone MP Barry McElduff for his Kingsmill tweet has been condemned by unionist politicians.

Sinn Féin announced on Monday that Mr McElduff had been suspended for three months for posting a video on Twitter featuring him with a loaf of Kingsmill bread on his head.

The video, which was posted on Friday, the 42nd anniversary of the Kingsmill massacre in which the IRA killed 10 Protestant textile workers, prompted widespread criticism and claims that Mr McElduff was intentionally mocking the dead and bereaved.

He was called to a meeting in Belfast on Monday afternoon with the Sinn Féin leadership, including its Northern leader Michelle O’Neill. There was speculation beforehand he might have been forced to resign. This was fuelled by comments earlier on Monday by Sinn Féin chairman Declan Kearney who said Mr McElduff’s action was “indefensible”.

Mr McElduff again “unreservedly” apologised for this tweet and insisted the hurt he caused was not intended.

Ms O’Neill said that at their meeting she “made it clear to Barry that his tweet was ill-judged, indefensible and caused hurt and pain to the victims of Kingsmill, that it falls far short of the standard expected of Sinn Féin representatives and our members.

“I don’t believe that Barry’s actions were calculated or deliberately intended to be malicious,” she added.

“However, given the seriousness of the issue, I have suspended Barry with immediate effect for a period of three months. Barry accepts this suspension as an appropriate response to his social media activity,” said Ms O’Neill.

“To the Kingsmill families I recognise the hurt this has caused and I wholeheartedly apologise for any distress,” she added.

Ms O’Neill said Mr McElduff would continue to receive a Sinn Féin salary while suspended and could still represent his West Tyrone constituents.

DUP leader Arlene Foster said the families of victims felt the censure “added insult to injury” while DUP MP Emma Little-Pengelly said of the suspension: “That’s not a punishment, that’s a holiday”.

“I was actually with the victims when the news came through about the so-called sanction. They feel it has added insult to injury,” Ms Foster said after Sinn Féin’s announcement. “I have to say three months suspension on an MP who doesn’t actually go to Westminster is entirely meaningless.”

“The decision by Sinn Féin to suspend Barry McElduff for three months displays staggering and breathtaking contempt for the IRA’s Kingsmill victims and their families,” he said. “This is a disgusting decision that demonstrates their so called rights, equality and respect agenda is nothing more than hollow rhetoric,” added Mr Swann.

The Traditional Unionist Voice leader Jim Allister said “while there was nothing funny about Barry McElduff’s video the ‘punishment’ handed down by Sinn Féin really is a joke”.

SDLP leader Colum Eastwood said the response from Sinn Féin was “weak” while adding, “the last number of days for Sinn Féin has been about desperately firefighting a PR storm – it hasn’t been about enforcing proper discipline. It most definitely hasn’t been about addressing the hurt caused to the Kingsmill victims and their families.”

Alliance leader Naomi Long said while she welcomed the fact that Sinn Féin had taken some action “it wasn’t much of a sanction”.