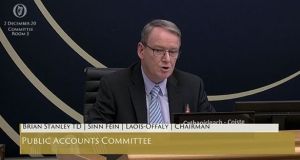 Sinn Féin leader Mary Lou McDonald has asked the party’s Laois-Offaly TD Brian Stanley to take a week off after following a political controversy over his social media activities.

Less than 24 hours after apologising for a tweet that praised IRA attacks on British soldiers, the Public Accounts Committee chairman was forced to defend himself on Thursday against alleged homophobia in a tweet posted on the day Leo Varadkar became Ireland’s first openly gay political leader in 2017.

In addition to the tweets, Mr Stanley seemed to infer during an interview with a local radio station that he would not eat Chinese chicken over his concerns about the spread of Covid-19.

Ms McDonald held a meeting with Mr Stanley on Friday amid calls from Government that he make a public statement and take questions before the Dáil.

In a statement, Ms McDonald said: “Today I met with Teachta Brian Stanley. We discussed the ongoing public commentary relating to tweets he has posted and a radio interview he gave in March.

“At my request, Teachta Stanley will take next week to be with his family, for whom this period of public controversy has proven very difficult.

“Teachta Stanley has this afternoon written to the Ceann Comhairle to request time to make a full personal statement to the Dáil on December 15.”

Mr Stanley had being facing mounting calls to appear before the Dail following a series of controversies.

Earlier, Taoiseach Micheál Martin said the credibility of the Public Accounts Committee has been thrown into question by the social media activity of its chairman.

Mr Martin said the Laois-Offaly TD needs to reflect on the impact on the PAC in terms of the issues that have arisen following his two controversial tweets.

Mr Martin said the tweet about Mr Varadkar had an inference of homophobia in his view and exacerbated the situation for the Sinn Féin TD. He also said that his view was that Mr Stanley’s apology for the tweet that referred to the IRA atrocities was not sufficiently comprehensive.

“It’s part of a wider agenda by Sinn Féin to justify the narrative of the past 40 years,” he said. “It’s a problem for me and a problem for younger generations, of informing a them that it was appalling.”

In a strident criticism of the IRA campaign, Mr Martin described the Narrow Water bombings - in which 18 British paratroopers died - and the bombs which killed Lord Louis Mountbatten and three others - as “crimes against humanity” and “war crimes”.

“In my view I do not believe his (Stanley’s) apology was comprehensive nor did it did deal with glorification of military events he spoke, or the deaths of so many people,” he said. “There are loved ones of those who died who are still alive. That (tweet) was very upsetting to them.”

So with the recent controversy surrounding Brian Stanley, I’ve decided to step down as LGBT Officer and member of Ógra SF UCD. This is not something I wanted to do, but after thinking it over the last few days I feel it’s the best decision.

The suggestion come as Mr Stanley’s party colleague Louise O’Reilly said the tone of the 2017 tweet was not acceptable but that a wrong inference was put on it and the allegation that there was homophobic content. The tweet should be taken in the context of “the whole world” discussing the fact Ireland had its first openly gay leader, she said.

Minister for Finance Paschal Donohoe and Minister for Justice Helen McEntee renewed their criticism on Friday of the Laois-Offaly TD, over a number of insensitive posts on his Twitter account.

Less than 24 hours after apologising for a tweet that praised IRA ambushes at Narrow Water in 1979 and at Kilmichael during the War of Independence, Mr Stanley found himself defending himself against alleged homophobia.

Mr Stanley rejected any suggestion of homophobic undertones to a tweet that read: “Yippee 4 de tory. it’s Leo. U can do what u like in bed but don’t look 4 a pay rise the next morning.”

He said on Thursday that his record on campaigning for LGBT rights “speaks for itself” and he was involved in every campaign for gay rights. “I don’t have any apology to make to anybody,” he insisted.

Mr Donohoe asked on Friday why the social media accounts needed to be deleted and questioned if there were further posts that could prove problematic for the Laois-Offaly TD.

He called on Mr Stanley to clarify if there were other comments on the account that was deleted and to explain why it was necessary to delete it.

In a signal of an escalation of the matter by Fine Gael, Mr Donohoe said that the apology and the deletions were no longer enough and clarity needed to be given.

“It’s not enough what Brian Stanley said, and his tweet of a number of years ago where he linked someone’s sexuality to the job they do is just utterly unacceptable,” Mr Donohoe told RTÉ Radio.

Likewise, Minister for Justice Helen McEntee said on Friday that Mr Stanley should come before the Dáil to explain himself on the matter.

Speaking on LMFM radio, she said: “My own view is that it referred very negatively and in a completely inappropriate way to the sexuality of my own party leader. And I do think he needs to clarify why he tweeted it and what exactly it was in reference to and I think that’s not just a political thing. I think LGBT groups would share the same view.”

Sinn Féin defended Mr Stanley in relation to his tweet about Mr Varadkar, backing his defence that there was no homophobic innuendo or intention behind it.

“If any offence was caused, of course Brian needs to engage and he needs to have those discussions with people,” she said.

As a party colleague, she knew Mr Stanley to be an ally to the LGBT community and a “very, very staunch campaigner, not just for LGBT rights but also for human rights.”

It was important to understand the tweet in context, she said. “At the time in 2017, not just here in Ireland, but the whole world was talking about the fact that we had elected an openly gay head of Government.

“It is something for which we should rightly be proud, and Brian Stanley’s remarks are in that context.”

However, Ms O’Reilly said that the tweet had been left open to misinterpretation. Twitter was not the platform for everybody, “not everybody is suited to engagement on Twitter”.

She said Mr Stanley was not on the platform any more “as I’ve said it is not for everybody.”

However, the tweets did prompt negative reaction and criticism within the party. Seán Pender from Kildare, who is an LGBT officer and member of Ógra Sinn Féin in UCD announced he was resigning because of the recent controversy surrounding Mr Stanley.

“This is not something I wanted to do, but after thinking it over over the last few days I felt it’s the best decision,” he wrote on Twitter.

Mr Curran, who left politics in 2019, added that the views “did not really represent the Sinn Féin that I know. Something like this holds the party back from doing what it wants to do,” he said.

Fianna Fáil has been more circumspect in its criticisms. Minister or State for Higher Education Niall Collins said the tweets were “incredibly stupid” and criticised Mr Stanley for portraying himself as a victim.

Speaking on Today with Claire Byrne on RTÉ, Mr Collins said, however, he was not calling on Mr Stanley to resign as that was a matter for himself. He added that there was a wider issue of Sinn Féin activists and their use of social media. Mr Collins said that during the Mother and Baby Homes debate he had been “hugely abused” on social media by “Sinn Féin types.”

When questioned about this he said the abusive tweets had been from Sinn Féin supporters, not necessarily members. It was not acceptable that some people said one thing in person or in public, but something else on their social media account, he added.

Leadership needed to be shown, it was an ongoing challenge. The issue had to be addressed at all levels, he urged.