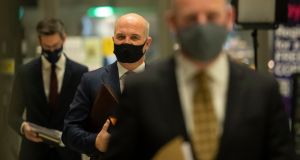 From left, Dr Ronan Glynn, Dr Tony Holohan and Professor Philip Nolan of Nphet at a Covid -19 press conference at the Department of Health on Thursday evening. Photograph: Colin Keegan/Collins

Daily Covid-19 cases could climb as high as 1,200 by mid-January if the virus spreads rapidly over Christmas, public health officials have warned, placing the State on the cusp of lockdown.

Chief medical officer Dr Tony Holohan said such a scenario was “not an inevitable one”, if people limited their contacts over the next month.

The National Public Health Emergency Team (Nphet) projected on Thursday night that if the reproductive rate of the virus spiked significantly over a busy two-week festive period, the country could be facing daily case numbers similar to the levels in October which saw the introduction of a six-week lockdown, .

The concern comes as restaurants and gastropubs reopen for indoor dining across the State on Friday for the first time in two months as part of the phased emergence from Level-5 restrictions.

Health Service Executive chief Paul Reid said people were facing into the “highest risk” Christmas of their lives. As people meet in restaurants, their “guard can understandably drop, especially after a glass or two of wine”, he said.

While encouraging people to enjoy the holidays , he urged them to “be on their highest level of guard” over the coming weeks.

Speaking during a press conference, Mr Reid said there had been much talk of another lockdown in January if cases soared again because of the festive easing of restrictions but that “It doesn’t have to be that way if we take all of the precautions and do the simple things very well.”

Minister for Health Stephen Donnelly said it was “important” that, despite wonderful vaccine news, people “don’t lose discipline, for next few weeks we live well, but keep each other safe”. He told RTÉ the fall in case numbers were “bottoming out a week quicker than hoped” with the lowest number projected to be next week before figures go back up.

Prof Philip Nolan, chair of Nphet’s modelling group, on Thursday outlined several projections for the number of daily cases next month, based on various potential reproductive rates of the virus, known as the R-number.

If the R-number increased from the current 0.8 to 1.4, as people began to socialise this month, the country might see 300-600 new cases a day by the second week of January, he said.

“Realistically there is a concern that we might see R-numbers in the range of 1.4, unless we collectively are exceptionally careful to limit our social contacts,” he told a press briefing.

However, health officials were concerned about what would happen if the R-number rose to 2, during a two-week period of expected increased social contact and gathering around Christmas.

“What that does is very significantly accelerate the spread of the virus through the core festive period and leaves us in very rapid exponential growth in early January,” Prof Nolan said. “Those scenarios, with a very high level of viral transmission in the Christmas period, would see somewhere between 800 and 1,200 cases a day by mid-January,” he said.

Prof Nolan said the purpose of outlining the stark projections was to highlight “the risks we face over the coming weeks”.