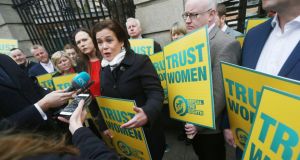 A number of Sinn Féin’s elected representatives are uncomfortable with the party’s policy on abortion but are unwilling to say so publicly, a veteran republican figure has said.

Francie Brolly, a former member of the Northern Ireland assembly, resigned from Sinn Féin earlier this year in protest at its abortion policy.

Mr Brolly said a number of Stormont MLAs, TDs, councillors and others “are very uneasy about the direction the party is going on abortion”.

His comments to The Irish Times come as the Sinn Féin leadership has yet to decide whether to hold an ardfheis to update its policy on abortion before the referendum on the Eighth Amendment to the Constitution, which is expected to take place on May 25th.

Sinn Féin is in favour of repealing the amendment, which gives equal right to life to the mother and the unborn, and allowing for abortion in cases of rape, incest, fatal foetal abnormalities and where the life or health of the mother is at risk.

It is not in favour of abortion without restrictions during the first 12 weeks of pregnancy – which is the policy that will be put before the Dáil by the Government if the referendum passes.

Party leader Mary Lou McDonald is in favour of abortion without restrictions during the first 12 weeks of pregnancy but party figures claim it is logistically difficult to organise an ardfheis before the referendum.

Mr Brolly, however, accused the party leadership of “hedging their bets”.

The couple are also well known musicians and their son, Joe, won an All Ireland football title with Derry and is a prominent GAA pundit.

Mr Brolly said he was in contact with MLAs and had previously written to them requesting their support for a free vote in Sinn Féin on abortion.

He achieved a “lot of support, although they are not going to be upfront and vocal” and claimed it was “fundamentally wrong” and “fascist” not to allow a free vote. Sinn Féin has rejected motions calling for free votes at a number of ardfheisheanna.

While Mr Brolly said it was “easy” for him to speak out, others “who make a living out of politics” are not as free to do so.

“The leadership of Sinn Féin do not have the willing support of a large number of elected representatives,” he said. In particular, some MLAs would like to be able to canvass “door to door” and say the “party position is not theirs”.

Along with Sinn Féin TDs Peadar Tóibín and Carol Nolan, councillors and others, Mr Brolly took part in the large anti-abortion march in Dublin last Saturday.

They marched under the banner of a group called “Cherish all the Children” which is casting itself as an organisation for the “majority of republicans” opposed to repealing the Eighth Amendment.

Neither TD informed party headquarters of their attendance ahead of the rally. Ms Nolan said she is unconcerned about the effect her stance against party policy may have on her career.

“Come what may. I am not worried about what may face me.”

Mr Tóibín has had an arrangement with the party leadership since 2014 that he may speak against Sinn Féin’s position on abortion, providing he outlines the official party stance.