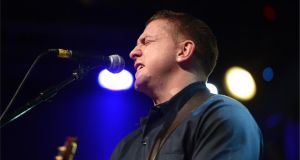 Singer Damien Dempsey rescued two swimmers who got into difficulty in a Co Wexford river yesterday, according to local media reports.

A retired member of the Fire Service told South East Radio he watched as two men in their early 20s appeared to get into difficulty while swimming in the River Slaney following the Strawberry Festival in Enniscorthy.

“There was one guy in the river who looked to be in his late teens or early twenties,” said the witness, Mark Ronan. “He was splashing about and was having trouble staying afloat. From what I gather his friend jumped in to try and save him, but he started having trouble as well.”

Mr Ronan, who told the station he had recently retired from New Ross fire service after 27 years, said he watched for a few minutes before realising the incident was “developing into a worrying situation.”

He said: “I knew from experience in emergency rescue situations that was going to get out of hand.”

Mr Ronan said he couldn’t swim but tried to find help for the swimmers.

“I turned around and see some fella dressed all in black, as cool as you like, taking off his shoes and climbing down the embankment. I recognised him straight away as being Damien Dempsey.

“He had some sort of sheet or blanket wrapped around him, I haven’t a clue where he got it, or where he came from.

“He swam out and tossed him one end of the sheet to the young guy and towed him back to safety.”

The other man managed to make his way to safety, he said. Dempsey then walked off, dripping wet, without “waiting for anyone to slap him on the back.”