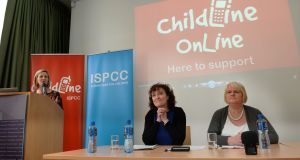 More than 1,000 children a day phoned Childline looking for help last year and three-quarters made the call outside office hours, the Irish Society for the Prevention of Cruelty to Children has said.

The call was also made earlier this week by Prof Geoffrey Shannon, Government child protection rapporteur, in his report on the Garda’s use of emergency powers to take children into care.

Speaking at the launch of the ISPCC annual report, Ms O’Sullivan said she had been lobbying the Taoiseach and the candidates for the Fine Gael leadership, Leo Varadkar and Simon Coveney, as well as the head of Tusla, the child and family agency.

“What we want now is recognition; let’s not pretend any more, we have to have 24-hour services,” she said. “We cannot continue to say it will cost too much and we have other things to do.”

She noted there were 100,000 people out protesting against water charges and asked where were the 100,000 demonstrating “about how we are treating our children?”

Childline, a helpline run largely by volunteers, received more than 385,600 calls from children last year, and a further 19,500 contacts online or via text. Topics raised by children included homelessness, or fear of homelessness, bullying and cultural differences.

In total more than 600,000 calls were made to the helpline, including hang-ups and calls that could not be answered. The majority of calls were at the lower end of need, but six calls a day were from children at high risk and in need of protection and support.

More than 70 per cent of the phone calls answered were from boys, while girls dominated online and text contacts.

Also speaking at the launch, Emily Logan, chief commissioner at the Irish Human Rights and Equality Commission, echoed the call for a 24-hour social-work service.

“In the absence of 24-hour service, if things close at 5 o’clock, who is left there to pick up the pieces, who is there to provide a service? It’s actually the guards, and in terms of listening to children, it’s Childline,” she said.

Ms Logan also raised concerns about the International Protection Bill, which aims to govern rules on families of refugees being allowed to enter the country. She said it would not allow, for example, a child whose parents might have died, to have an aunt or grandparent from their home country come to live with them.

She highlighted the “pouring of money into the emergency element of housing and homelessness” when we should be looking at social housing and long-term care. She said the commission would particularly look at family hubs, the new emergency accommodation due to come on-stream soon.

“Are we creating something that is going to look like direct provision?” she asked.